Apple in late October unveiled a refreshed version of the Mac mini, marking the first update to the company's smallest desktop machine in four years.

We managed to get our hands on one of the new Mac mini models, and in our latest video, we unbox it and share our first impressions on the revamped machine.

Subscribe to the MacRumors YouTube channel for more videos.
The Mac mini's design hasn't changed, and it's still a 7.7-inch square box that's 1.4 inches thick, but it is available in a new Space Gray color rather than the traditional silver.

It's otherwise the same, but with the exception of a new selection of ports. The Mac mini is outfitted with four Thunderbolt 3/USB-C ports, two USB-A ports, an HDMI 2.0 port, an Ethernet port, and a 3.5mm headphone jack. 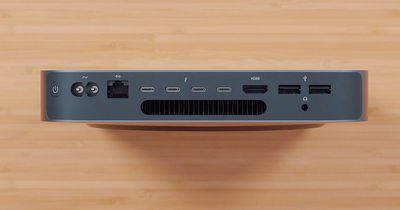 While the design is largely the same, the internals of the Mac mini have been entirely overhauled. There are new, more powerful components, which necessitated a bigger internal fan with twice as much airflow, expanded vents, and a revamped power supply that offers 70 percent more maximum sustained power.

The base Mac mini ships with a 3.6GHz quad-core 8th-generation Intel Core i3 processor, and this is actually the first time that all Mac minis have had at least quad-core processors. A higher-end 3.2GHz 6-core Core i7 processor is also available as an upgrade option.

All 2018 Mac mini models ship with an included T2 chip, which makes sure all of the data on the SSD is encrypted using dedicated AES hardware, and offers a secure boot to ensure your software isn't tampered with and only OS software trusted by Apple loads at startup.

The Mac mini uses Intel integrated UHD Graphics 630, but with the Thunderbolt 3 ports, it's able to connect to an eGPU for workflows that require more graphics power. Thunderbolt 3 also lets the Mac mini connect to two 4K displays at 60Hz or one 5K display at 60Hz.

8GB of RAM comes standard in the Mac mini, but it can handle up to 64GB, with Apple offering an option to customize the machine with additional RAM when placing an order.

Likewise, the base machine also ships with a 128GB SSD, but it can be upgraded to 2TB of storage in total.

None of these new features in the Mac mini come cheap, and the base level model now starts at $799, up from the $499 starting price of the 2014 model.

Unfortunately, as with many Apple products, the Mac mini is not really user upgradeable. You can upgrade the RAM, but you need to take the entire machine apart, which is tricky. The CPU and SSD, meanwhile, are soldered in place and can't be upgraded after purchase.

What do you think of Apple's new 2018 Mac mini? Was it worth the four-year wait? Let us know in the comments.

BaltimoreMediaBlog
There's no reason except ineptness, poor design, and greed for the Mac Mini to not be user upgradeable. Period.

Prediction: After slow sales, Apple will eventually discontinue this if not get out of the modular desktop or pro market completely. They just don't care enough nor do they want to listen to real desktop or pro users. I hope I'm wrong, but it seems as if Apple is incurably infected with the iPhone thinness, lightness, shiny things disease. My near 10 year old Cheese Grater Pro is still a more capable machine than this on several levels.
Score: 67 Votes (Like | Disagree)

Lacasse
I like your videos guys, but this one is click bait at its finest. Lol...”here’s our hands on first impressions of the Mac mini” ..proceeds to rattle off some specs, “it’s a square aluminum box”.....then at 2:10: “we’ll, as it’s difficult to give you a first impression without diving into the Mac mini, please wait until our next video”. Lol. Oh well, I appreciate the effort.
Score: 38 Votes (Like | Disagree)

drumcat
"Was it worth the wait?"

No. We were expecting better. There's really no excuse for this. It will work for some, but the obvious lack of upgradability is intended to put screwdriver kiddies off until the Mac Pro comes out. And that is likely to disappoint all except the rich tinkerers.
Score: 26 Votes (Like | Disagree)

DLPc
was going to give one a shot.... went in to buy at the apple store, and took a couple of mid size work files with me to test out. just as my theory went... this thing throttles like crazy. i was never able to see the cpu hit the max turbo speed (except for maybe a split second at the beginning of a crunching run)

gauging from the reaction im seeing online... apple (once again) has a massive heat dissipation issue. the longevity of this machine is going to be NIL due to excessive heat.
Score: 18 Votes (Like | Disagree)

Macalope
The purpose of the original mini, as I understood it, was to create an affordable MacOS machine that would spread the adoption of Macs. With the 60% price hike, it no longer serves that function. Speaking as someone who was in that original demographic and was interested in buying a new Mac in that same price range, no, it was definitely not worth the four-year wait.
Score: 17 Votes (Like | Disagree)
Read All Comments