Apple's embargo lifted today on the first full-length reviews of the new MacBook Air ahead of the notebook's release on Wednesday. 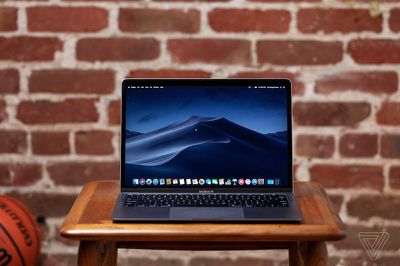 The new MacBook Air via The Verge
The new MacBook Air features a faster 1.6GHz dual-core 8th-generation Intel Core i5 processor, a Retina display, up to 16GB of RAM, up to 1.5TB of SSD storage, and Intel UHD Graphics 617. It also has Touch ID, two Thunderbolt 3 ports, and the same third-generation butterfly keyboard as the latest MacBook Pro.

So let me just bottom line it: this new MacBook Air is faster than the old MacBook Air, but not by the kind of margin you'd expect after three years (or even one, if you happened to buy the 2017 model). You can do all of the same stuff you can do on your current Air. I have been running a half-dozen apps at a time along with more than a dozen tabs in Chrome, and everything is pretty okay. I think for what most people will do with this laptop, it's fine. …

If you're hoping you'll be able to upgrade and get way faster video editing or process a ton of RAW photos at once, get a MacBook Pro. Those kinds of tasks will bring this Air to a chug and spin up those fans. I have found it to be more capable and powerful than the 12-inch MacBook, but, again, the difference is not as big as I'd hoped.

People like the Mac. It's great to have a computer that does all of the computer stuff you want in a way you're familiar with. Until recently, the best computer for most people was the MacBook Air, and Apple took way too long to update it. So people have been waiting. And waiting.

Now, the wait is over. But if you were hoping that lightning would strike twice and this new MacBook Air would be as revolutionary as the old MacBook Air, well, it's not. It's basically a MacBook that finally includes all of the stuff that has been happening with laptops for the past few years. It is on par with the rest of the laptop world, but it hasn't moved beyond it.

What might push you towards the Air, though, more so than any other Mac laptop, is its battery life. …

Not surprisingly, the laptop drained much more quickly when I used the MacBook Air to charge my iPhone, something I do often. But in another recent test—browsing in Safari, running Slack and iMessage, editing a few photos in Lightroom, all with the display between 60 to 70 percent of maximum brightness—it lasted just under eight hours.

A lot of people are looking at the lineup as it stands today thinking they must be missing something, because it seems obvious that most people looking for a MacBook in this price range should buy the new MacBook Air. They’re not missing anything. The new Air is exactly that: the MacBook most people should buy, and exactly the MacBook everyone has been asking Apple to make.

There's no doubt the new Air marks a sizable update. It's pricier, too, though Apple's kept things more in check here than with the Mac Mini. With all of its upgrades and lower price point to boot, the Air is the clear pick over the 12-inch MacBook in practically every way.

As a matter of fact, barring some major future upgrade, the 12-inch likely isn't long for this world. And that's perfectly fine. The new Air is very clearly the better buy.

This is the same screen technology already in use on the 12-inch MacBook, and the color spectrum Apple is touting is actually sRGB -- a common spec for laptops in this price range. In fact, that's one of the main differences between this screen and the MacBook Pro: For the money, Apple's highest-end laptops step up to the professional-grade P3 color spectrum. I don't miss it, but if you do, the Air wasn't the right laptop for you anyway.

If you're shopping for a Mac laptop, start with the MacBook Air. Want a cheaper model? The old Air is there for as long as it lasts. Want something even smaller and lighter, and are willing to trade some power, port flexibility, and money for it? The MacBook is for you. Want something more powerful, and are willing to take on a slightly heavier and more expensive device? The 13-inch MacBook Pro without Touch Bar is for you. Want even more power? The 13- and 15-inch MacBook Pros offer numerous opportunities to upgrade specs and spend more money.

When we compared the display of the new MacBook Air to our 15-inch 2017 MacBook Pro, they both looked pretty solid, but we noticed at least one difference —the new Air doesn't get quite as bright. When we checked out the specs page, Apple outlines the newest Pros can reach up to 500 nits of brightness, while the new Airs only max out at 300. This would be more noticeable for anyone working outside, but isn't a big deal in an office environment, or even a bright room.

The new MacBook Air is available to order on Apple.com, with deliveries to customers and in-store availability starting tomorrow. The notebook now starts at $1,199, while Apple continues to sell the previous-generation model for $999.

levitynyc
Most people need 256GB of storage rather than 128GB.

Most sane people would completely balk at that being a $200 upgrade cost.
Score: 38 Votes (Like | Disagree)

The Phazer
And the last good Macbook keyboard dies.

Most people need 256GB of storage rather than 128GB.

Most sane people would completely balk at that being a $200 upgrade cost.

So yes I agree with you.... Most sane people should stay away unitl Apple decides it can't keep raising prices to offset declining/stagnant sales.
Score: 22 Votes (Like | Disagree)

Give me that and I'll buy. Otherwise, no deal.
Score: 11 Votes (Like | Disagree)

If you can afford it, don’t wish for your keyboard to be quiet and feel satisfying, and don’t mind needing a cable every time you wish to import photos from a DSLR. Also, the two Thunderbolt ports are too close together for many uses [something Apple could have avoided easily]. What is it with Apple notebook designers being so anti-user?

To be fair to Apple, though, I can understand why the price went up. After all, they now only make a mere profit of $1B every 6 and a half days [yes, profit].

I’m sure Jony Ive can afford these products, with his chauffeur-driven Bentley, and his $17M town house. Which he bought for design reasons, of course. How quaint.
Score: 7 Votes (Like | Disagree)
Read All Comments