The first benchmark for the 2018 MacBook Air surfaced on Geekbench today, giving us our first look at how the low-power 7W Amber Lake Intel chip in the machine measures up to the performance of other Macs in Apple's lineup. 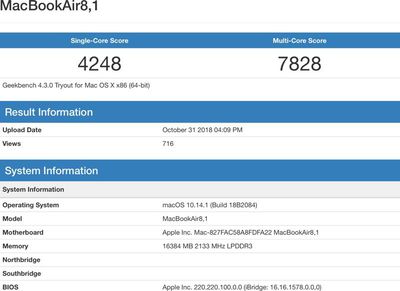 As should be no surprise, it's significantly better than the previous-generation MacBook Air equipped with a 1.8GHz Broadwell processor, which earned a single-core score of 3335 and a multi-core score of 6119.

It's also slower than the 2017 13-inch MacBook Pro sans Touch Bar that Apple still sells, which earned a single-core score of 4314 and a multi-core score of 9071.

Previous MacBook Air chips used 15W U-series chips from Intel, but the 2018 model is using a lower-power 7W Y-series chip, and there were some concerns about its performance relative to the rest of the Mac lineup.

Based on these Geekbench scores, which aren't necessarily indicative of how these machines will perform in the real world, the MacBook Air is superior to the MacBook lineup at this time, but falls short of the base-level MacBook Pro, which is about right given its price point ($1,199 for the Air vs. $1,299 for the Pro). What the Mac lineup will look like if and when the 12-inch MacBook is refreshed remains to be seen.

Additional benchmarking results should be available soon, as the MacBook Air is set to arrive to the first customers on Wednesday, November 7, and MacBook Air reviews should come out before then.

It’s very simple. For you nothing less than a 2018 13” TB. For casual users i.e. the sort of people who have never opened a computer up and never will, the new MacBook Air or the 12” MacBook if they want a thinner notebook.

Basically, if you go on MR and tech forums, a MBA is not for you. For everyone else they are fine.

But surely a casual user will pay £400 for a windows laptop. Is there such a thing as a Apple casual user who pays £1200 or £1400 for a laptop? I really don't think so. In todays world, £1400 is a hell of a lot of money. Good luck to Apple with the Air but I think that greed has caught them with this and it's going to fail. £1000 for an iPhone X that does everything Ok because that's often bought on a contract but £1400 for a basic, rather unadventurous MacBook Air no thanks.
Score: 19 Votes (Like | Disagree)

DanGoh
I don’t even know what Macbook I plan to upgrade from my 2013 MBPr much less which one to reccomend to people anymore.
Score: 15 Votes (Like | Disagree)

Imagine if they'd used the existing chassis and upgraded. They could have made a great machine. Instead they had to thin it down, shrink the battery etc.
Score: 11 Votes (Like | Disagree)
Read All Comments

Monday June 27, 2022 3:38 am PDT by Tim Hardwick
Polish developer Michał Gapiński has released a new and improved version of his "Tesla Android Project" which brings Apple's CarPlay experience to more Tesla vehicles than ever before. According to Gapiński, version 2022.25.1 provides "100% functional CarPlay integration for any Tesla," and comes with several new features and bug fixes. The project now supports DRM video playback so that...
Read Full Article • 154 comments