Apple's newly upgraded MacBook Air is equipped with a 1.6GHz dual-core Intel Core i5 Processor with Turbo Boost up to 3.6GHz, a chip configuration that does not match any of the 8th-generation chips that Intel has announced to date.

Intel, in fact, lists only a single 1.3GHz dual-core processor in ARK, which does not line up with the chip Apple is using in the MacBook Air. 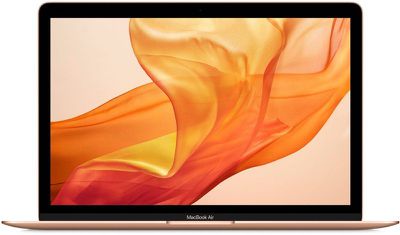 Instead, Apple appears to be using an unannounced Intel chip that, according to AnandTech, is part of the 5W Y-Series Amber Lake chips. Intel announced these Amber Lake chips, traditionally used in the MacBook, back in August.

And while the company never names the specific processor models they use, the specifications here - 3.6GHz turbo with Intel UHD Graphics 617 - do not match any known Intel chip, even when factoring in various cTDP options. We've heard rumors of Intel putting together a Core i5-8210Y, and we've reached out to Intel to try to confirm.

Historically, Apple has used 15W U-series chips in its MacBook Air upgrades, but power wise, this will put the new MacBook Air on par with any future MacBook upgrades that also use Intel's Amber Lake chips.

Though the MacBook Air is now using a lower power Y-series chip, because the previous-generation MacBook Air was still equipped with a Broadwell chip, the new model is still going to see significant performance improvements. Unfortunately, the performance gain isn't going to be as impressive as it would have been had Apple stuck with U-series chips.

Using a 5W chip has allowed Apple to significantly cut down on power consumption, which explains why the MacBook Air has the longest battery life out of any of Apple's notebooks.

Apple is only offering a single processor for the MacBook Air, and there are no build-to-order options to upgrade it to a faster speed.

Using a MacBook-class chip in the MacBook Air makes some sense if Apple plans to keep the MacBook in its lineup. With the MacBook Air's slimmer bezels and new Retina display, there's not a lot separating it from the 12-inch MacBook. If it also used U-series chips, it would outperform future MacBook models, and it would make little sense to purchase a MacBook.

This way, the MacBook Air offers a Retina display, MacBook-class performance, and a slimmer body, while the MacBook retains its position as Apple's thinnest, lightest machine, presumably with faster Y-series chips once an upgrade is released.

Apple's revamped MacBook Air can be purchased from the online Apple Store for $1,199, $100 cheaper than the MacBook, but $200 more expensive than the previous-generation MacBook Air.

Update: Intel has added the new MacBook Air chip to its ARK database. As AnandTech guessed, the MacBook Air is using a Core i5-8210Y Amber Lake Y processor, but at 7W, not 5W.

The lineup and its naming has become a huge ugly mess

Could've been so much simpler and so much more streamlined:

Air is a freakin' monkey wrench

Don't even get me started on XS Max

Lesser Evets
That "sub $1000" rumor dried up and blew away like dead, autumnal weeds.
Score: 31 Votes (Like | Disagree)

Ok so business as usual then.
Score: 16 Votes (Like | Disagree)

oldmacs
Wow so to thin the bloody thing down and keep the battery life they had to sacrifice performance?

Would have been a killer machine if they'd just kept the old enclosure and updated it accordingly.
Score: 12 Votes (Like | Disagree)
Read All Comments