Apple's HomePod Siri-enabled smart speaker expanded to an additional two countries today, with the device now available for purchase in Spain and Mexico.

In Spain the HomePod is priced at 349 euros, and in Mexico, it can be purchased for 7,999 pesos. The HomePod is more expensive in Mexico and Spain than in the U.S. due to value added taxes in both countries. 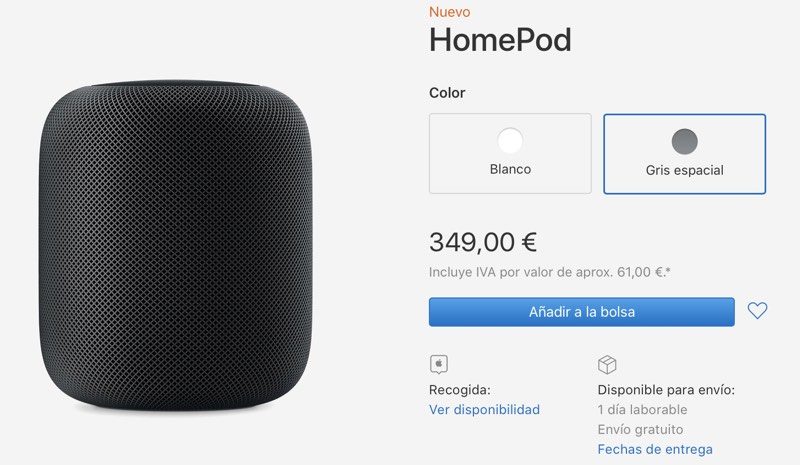 With the HomePod's expansion to Spain and Mexico, the speaker is now available in a total of eight countries. When HomePod first launched in February, it was available in the United States, the United Kingdom, and Australia before expanding to Canada, France, and Germany in June.

Rumors suggest the HomePod could expand to Italy in the near future, with Apple employees testing an Italian language version of the device.

TantalizedMind
Finally the cartel can listen to some sick beats. :)
Rating: 2 Votes

Regbial
Too little, too late. Just give up Apple.
Rating: 2 Votes

Too little, too late. Just give up Apple.

Too little, too late. Just give up Apple.


Weren’t you one of the ones who said the same thing about the AppleWatch?

Apple always starts with a basic foundation and consistently improves the devices while it slowly builds up an installed base. When it reaches a critical mass, everyone has to have one. It happened with the iPod, with the iPhone and with the AppleWatch. In a few years everyone is going to be falling over themselves to get a HomePod.
Rating: 1 Votes


Extremely less fortunate: they suffer from universal healthcare, less income inequality, no hurricanes, no synagogue shootings, no school shootings, no Trump... I too wonder who would ever want to live in such an unfortunate country.
Rating: 1 Votes

tatsumi
Meanwhile I am still waiting for it to release in japan, one of the biggest markets for apple, which the majority of smartphone users being on iOS.

Well I guess I will have to buy another one in Australia.
Rating: 1 Votes

I have no use for a HomePod or any of the other smart speaker things. My phone can do anything these can do.

I don't need another device that just duplicates functionality.


What phone have you got that can fill a room with sound?
Rating: 1 Votes
[ Read All Comments ]