Reviews for the iPhone XR went live this morning ahead of Friday's launch, and in a press release in the Apple Newsroom, Apple has highlighted reviews from several members of the media who were able to spend some time with the new iPhones. 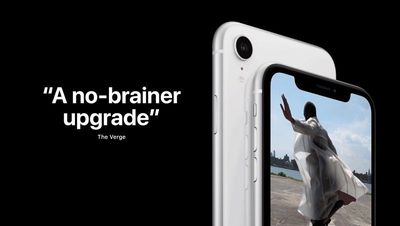 Mashable, for example, called the iPhone XR the "Goldilocks of iPhones" with its large screen size, affordable price tag, "fantastic" cameras, and future-proof power in the form of the A12 Bionic chip.

Daring Fireball said that the iPhone XR is the best Apple's ever made "dollar for dollar," while TechCrunch compared the device to "a piece of nicely crafted jewelry" with a "depth and sparkle" unmatched by other iPhones.

CNN praised the impressive Portrait Mode shots the camera is able to capture, The Verge lauded the work Apple did to make the rounded corners of the LCD match the corners of the device, and Digital Trends called the iPhone XR "the iPhone to buy."

Apple focused on sharing positive elements of the iPhone XR reviews, but for the most part, reviews were positive due to the iPhone XR's affordable price tag and high-end components.

The biggest difference between the XR and the XS is the LCD display over the OLED display, and reviewers thought the iPhone XR's display was one of the best LCD displays and while not as good as the OLED, it's not noticeable as long as you're not holding the two devices next to one another.

Apple's full list of review selections can be seen in the article shared via the Apple Newsroom, while additional reviews can be found in our own review roundup.

AvisDeene
And here I am, happy with my iPhone 6s Plus. If it lasts long enough, I’ll hold out until Bluetooth headphones have sound quality that rivals wired and for the micro-LED displays.
Score: 14 Votes (Like | Disagree)

sos47
XR has nice specs. But is too big.
Waiting for the iPhone XR Mini.
Score: 13 Votes (Like | Disagree)

Scottsoapbox
The XR reviewers were surprisingly subdued after all of the previous cautions to wait for it...

XS reviews: Most people should wait for the XR.
XR reviews: It's not really that much cheaper, so maybe get the XS.

Thanks guys. Thanks a lot.
Score: 11 Votes (Like | Disagree)

JPack
Unless you're the guy in the bottom pane, the iPhone XR is a home run for Apple.

I'm looking at the XR as an upgrade from the SE (which is essentially a 6S in 5's clothing).

My only concern is the Lightning port.

I'm onto my second SE in two years... first one's battery failed after exactly one year. Second one is again giving my grief after exactly a year. Both exhibiting the same problem — trouble keeping an electrical/power connection at the Lightning port. I'm constantly finding that I need to wiggle the cable to get a connection.

I haven't read many reports of this issue, and I'm hoping it's limited to the port used on the SE.

I don't want to pay the "tax" of upgrading to another phone only to have the same problem again after a year when my current phone works perfectly except for this one issue.

If you’re like 99% of the other people who have intermittent Lightning connection issues, your problem is pocket lint getting down into the jack, preventing the plug from seating properly. Apple will clean it out for you, or you can do it yourself with a non-conductive implement like a toothpick. Be sure to get all of it, it can be packed in there very tight!
Score: 7 Votes (Like | Disagree)

It's not affordable for a vast majority of people

Well, it depends on your frame of reference. For the majority of humanity air conditioning isn't affordable. That isn't Apple's market.
Score: 7 Votes (Like | Disagree)
Read All Comments