Google Chrome now enables picture-in-picture as a default setting on Mac, Windows, and Linux computers as of Chrome 70. If you are up-to-date and watching a compatible video in the Chrome web browser, you can minimize it and continue browsing the web in other tabs, while the video keeps playing in a new miniature screen (via Android Police). 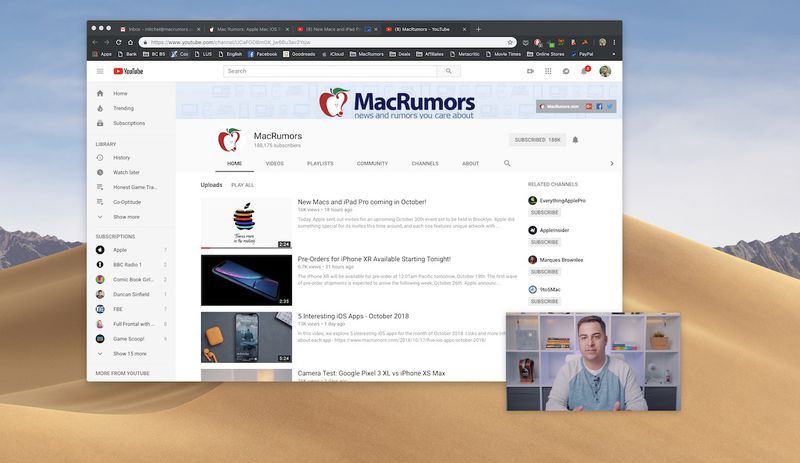 The feature works similarly to Safari's implementation of PIP: on compatible websites you can two-finger click twice on a playing video to find "Picture in Picture." This will pause the video on the main tab, turn it black, and display the video in a new window that can be moved around anywhere on the screen.

PIP was previously in the Chrome 69 beta but it had to be manually enabled, so it appears that Google is making it easier for users to gain access to the feature with Chrome 70. PIP still isn't available on every video-playing website since it will have to be adopted by each site, but you can enable PIP with YouTube in Chrome on macOS starting today.

StellarVixen
They can even introduce browsing the interstellar internet for all I care, that evil is not gonna touch my Mac, ever again.
Rating: 14 Votes

Eddy Munn
Why are they not using the built-in API's for PIP? It's a rather unappealing integration. For example, I can't put a video over a full-screen app.
Rating: 6 Votes

kuwxman
Imagine that. A Google related post and people ******** on the company. It got old a long time ago.

As someone who uses Chrome every day at work, this is a great addition!
Rating: 6 Votes

It would be nice to get pip for Safari in Netflix - I don't want to use Safari for this feature!


There's a free Mac app called Friendly Streaming that lets you stream Netflix (and YouTube, Hulu, Amazon Prime Video, twitch TV, HBO, ShowTime, etc.) in a standalone app without ever having to launch Safari. And it can be also be viewed in a PIP window while you're using other apps. I have no affiliation with the company or the developers - it's just something that I found because I was looking for a way to view Netflix and YouTube without having to use Safari.

It's available on the Mac App Store, if you're interested... DipDog3
Would recommend not using Chrome, Google automatically signs you in on Chrome and doesn’t respect your privacy settings.
Rating: 4 Votes

Imagine that. A Google related post and people ******** on the company. It got old a long time ago.

As someone who uses Chrome every day at work, this is a great addition!


My thoughts exactly. Don't like it? Don't use it and move on with your day.

I can only assume they are "like" hunters.
Rating: 4 Votes

iapplelove
I own all Apple products but use google services regularly.

I use hangouts all the time which has to run through chrome on Mac.

I even updated my time capsule to google WiFi so I guess I got over my google and privacy concerns really quick.

I mean even our ISPs sell our data now a days. Millions and millions of google users out there and never a serious breach.

So I’m not as worried as others.
Rating: 4 Votes

It can be turned off now:

Would recommend not using Chrome, Google automatically signs you in on Chrome and doesn’t respect your privacy settings.

It can be turned off now: