The R1 was designed to be the first fully autonomous drone, able to work without the need for a person controlling its every movement. Prior to today, using the R1 was as easy as tapping a few buttons in the Skydio iPhone app, and now it's getting even easier.

As of today, the R1 can be directed through a newly introduced Apple Watch app that provides one-tap controls and directives right on your wrist.


The Skydio Apple Watch interface provides quick access buttons to set the R1 to follow you or a friend as well as options for doing tricks and stopping flight. While there are no manual controls available via the wrist, the R1 operates largely on its own. If you do want to control it manually, you'll need to do so through the iPhone app.

MacRumors was able to give the R1 and the new Apple Watch app a try ahead of its launch, and it's as simple as Skydio describes. The R1 detects people in front of it, and with just a tap, it can be set to follow you, where it records everything you're doing as a sort of flying personal camera or photographer.

The R1 is a hands-off action cam replacement that's fantastic for hiking, biking, skiing, and similar activities where you might want to capture action-oriented video without the hassle of controlling a drone.

What's great about the R1 is that it has complex built-in obstacle avoidance capabilities. We wove it through trees and watched as it artfully dodged trunk after trunk with skill that even some advanced drone pilots would be unable to match.

The R1 is able to avoid obstacles because it's outfitted with 13 cameras that can see in every direction and identify objects like trees, people, cars, and more, using that information to decide what to do and what to avoid. 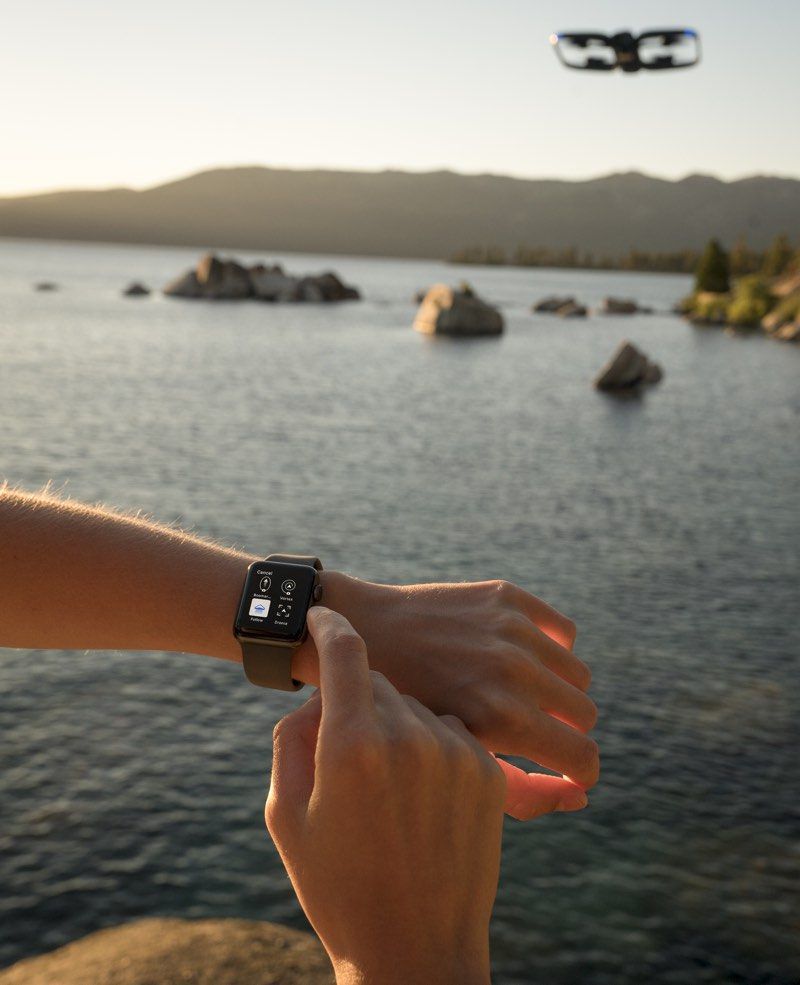 Once you set the R1 to auto follow mode, it basically flies itself, and there are some neat tricks that Skydio has programmed into it, such as the Boomerang that sends it flying forwards and backwards to capture a unique video shot.

The Apple Watch app offers up little thumbnails of the people around so you can set it to follow someone (or yourself), and it uses the Digital Crown in a unique way -- a twist of the knob rotates the direction of the drone.

Because it flies on its own, the R1 can do a series of neat little tricks, most of which are executable from the wrist. There are options for Dronie, Rocket, and Orbit, for example.

A Dronie starts close and then zooms out and up for a birds-eye view of a scene, while a Rocket shot starts close and then zooms straight up. An Orbit shot, as the name suggests, spins around you slowly. The Apple Watch app also includes a feature to return the drone to back to its starting place at the iPhone and shut it down, so you can get a full flight from the wrist.

Skydio's R1 basically flies itself and it needs so little interaction that it's simple to use right out of the box, even for those who have no drone piloting experience. All it takes is an iPhone for setup and it can be controlled with nothing other than the Apple Watch.

The R1 is excellent at obstacle avoidance, but it's still a drone and an expensive one at $1,999, so there are rules to follow. It can't be flown in windy conditions, and its cameras aren't able to detect thin branches as we learned during a crash, so caution needs to be exercised.

Skydio is continually improving the R1 drone with new features and further autonomous research. It's out of the price range of most people who would use it casually at this point in time, and it's not the most portable at the size of a pizza box, but the technology is worth paying attention to because this kind of autonomy could be the future of mass-market drone usage in a few years time.

Along with introducing a new Apple Watch app for controlling the R1, Skydio has additional news. Starting today, the R1 is available on the Apple online store and at select Apple retail locations. It can also be purchased from the Skydio website.

Scottsoapbox
This will really help when I feel alone when I'm away from all the cameras I have placed everywhere in my home.
Rating: 1 Votes
[ Read All Comments ]