Axios: Apple Has Acquired Asaii, a Music Analytics Platform 'Able to Find the Next Justin Bieber' [Update: No]

Apple has acquired San Francisco-based music analytics startup Asaii, according to unnamed sources cited by Axios. The deal, which has not been confirmed by Apple, was reportedly worth less than $100 million. 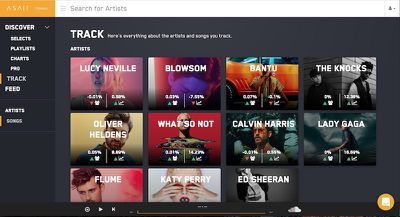 Asaii offered two products specifically: a music management dashboard for A&R representatives to quickly scout and manage talent, and an API for music services to integrate a recommendation engine into their platforms.

"Our machine learning powered algorithms finds artists 10 weeks before they chart," the startup's website states. "Our algorithms are able to find the next Justin Bieber, before anyone else," another page claimed.

The acquisition will enable Apple to bolster its content recommendations to users, and help it compete with Spotify's efforts to work directly with smaller artists and music labels, according to the report. Apple Music and iTunes are likely to benefit from Asaii's machine learning algorithms.

Asaii was founded in August 2016 by Sony Theakanath, Austin Chen, and Chris Zhang, who have collectively worked at Apple, Facebook, Uber, Salesforce, and Yelp previously. All three individuals now work on the Apple Music team at Apple, as of October 2018, according to their LinkedIn profiles.

In an email to customers shared by Music Ally last month, Asaii said it would be shutting down operations on October 14, 2018.

Last month, Apple announced that it completed its acquisition of Shazam, a popular music recognition service that can identify the names and lyrics of songs and music videos. Shazam could be more tightly integrated into Apple products and services as a result, ranging from Apple Music to Siri.

"As the first investors in Asaii, we are incredibly excited by their recent acquisition by Apple where they will have the opportunity to dramatically scale their impact and continue building out their vision for the future of the music industry," Cameron Baradar, founder of The House, told Music Ally.

However, Apple declined to provide us with its usual statement confirming an acquisition. MacRumors also received an anonymous, unconfirmed tip today claiming that Asaii's co-founders received standard job offers from Apple as part of a deal worth "way, way less" than $100 million, so it may be an acqui-hire.

Update - Oct. 15: TechCrunch's Ingrid Lunden has also been unable to receive Apple's usual statement confirming an acquisition, leading her to report that the company has not acquired the assets of Asaii. Instead, she says Apple merely hired the startup's three co-founders, consistent with the tip we received.

bladerunner2000
Nobody wants another Justin Bieber.
Score: 69 Votes (Like | Disagree)

Nobody wants another Justin Bieber.

But imagine what you could do if you could find him first. :)
Score: 30 Votes (Like | Disagree)

pavinder
So the algorithms will detect things within songs which, based on musical structure/chord sequences/whatever and chart history, contain elements deemed likely to become popular?
In other words, looking backwards.

This is probably going to make things even more formulaic than they already are...welcome to the homogenised world of unsurprising, generic, non-innovative "music".
Score: 14 Votes (Like | Disagree)

But imagine what you could do if you could find him first. :)

So the algorithms will detect things within songs which, based on musical structure/chord sequences/whatever and chart history, contain elements deemed likely to become popular?
In other words, looking backwards.

Looks like it’s worse than this. The article mentions that “The platform pulled data from social networks like Facebook, Twitter and Instagram [..] to find hidden talent”. This likely means that at least part of the algorithm weighs things like demographics, social trends, social media interactions etc. It’s got nothing to do with music (Hence the part about the next “Justin Bieber”).
Score: 9 Votes (Like | Disagree)
Read All Comments