Greg Joswiak, Apple's VP of iOS, iPad, and iPhone Product Marketing, recently sat down with Arianna Huffington on the Thrive Global Podcast to discuss the new Screen Time feature that Apple implemented for the iPhone 5s and later in iOS 12.

According to Joswiak, information is the "cornerstone" of what Apple is doing with Screen Time. The company's goal is to provide people with information about how they're using their apps so they can come to their own conclusions about whether they're happy with their usage statistics. 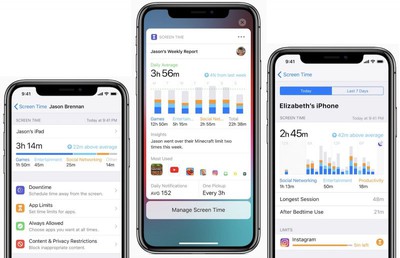 With Screen Time, built into iOS 12, users can get a complete overview on how much time is spent on each of their devices on a daily or weekly basis, with Apple offering up a weekly report. Joswiak says Apple wanted to make it as easy as possible, which is why iOS 12 asks people to opt in at sign up and delivers automatic reports each week.

For me, I couldn't imagine leaving my home in the morning without my iPhone. I think like most people. I still found it fascinating to be able to open up the Screen Time app and see where I was spending my time. [...] That information was useful for me to regulate myself a to the behavior that I want. I didn't need limits, I just needed that information.

Even with children, Joswiak thinks parents will benefit most from being able to have an "intelligent conversation" about device usage with real data usage rather than implementing parental controls, but the controls are there for parents who need them.

Because of Apple's focus on user privacy, no data about Screen Time or app usage information is sent to Apple or any third party. Apple can tell who has Screen Time enabled and who doesn't for users who send diagnostic information to the company, but data is otherwise "available only to you."

Joswiak also highlighted iOS 12's features for cutting down on notifications, such as Instant Tuning, which lets you quickly turn off notifications for a particularly bothersome app without having to dig into the settings. Do Not Disturb has also been expanded in iOS 12 with new options that let it be turned on for an hour or a critical event.

Apple was not concerned with people using their devices less as a result of Screen Time, because it aims to provide the best usage experience, not the longest. "We don't need to make you use it every minute of every day," said Joswiak. "Our business model doesn't depend on how much you use your devices."

Screen Time was not developed because of the well-known shareholder's letter that called on Apple urging Apple to do more to protect children from smartphone addiction. Screen Time was conceptualized well over a year ago with the idea that Apple "wants to empower people with Apple."

"It's not a kids thing," explained Joswiak. "It's an everybody thing." Apple didn't set out to create a solution for parents to lock down their children's devices, it was created to give everyone information on how devices are being used. "Apple is not reactionary," said Joswiak. "We bring out features we think are going to help people."

Screen Time is available for all devices starting with the 2013 iPhone 5s, and bringing these kinds of new features is to millions of iOS users is something that only Apple can do, according to Joswiak. He says that soon, 80 percent of the user base will be using the latest version of iOS 12, which is "staggering."


Joswiak says that Apple has "lots of ideas" on how to take Screen Time further in the future. "We know there's lots more we'll want to do over time," he said.
Tags: Greg Joswiak, Screen Time
Related Forum: iOS 12
[ 41 comments ]

iLoveDeveloping
Is it just me or is screen time really buggy? Sometimes it says I’ve been on instagram 30 mins and I know I’ve been on it for like an hour (yes I’m an addict), it only shows 3-4 days then everything is reset (I have yet to get a full weeks data) and it says I have 33 unlocks today and that’s total nonsense I’ve maybe opened my phone 5 times today it’s been in my pocket all day. Is my broken or is it just another great “feature”, from modern day Apple. ¯\_(ツ)_/¯
Score: 7 Votes (Like | Disagree)

When my son's screentime kicks on, he now goes into settings and turns his personal hotspot on and plays on his laptop. Please let us choose what the kids can do and can't do.

So let me get this straight. You KNOW your son is bypassing a curb you set for him and yet you need Apple to tell you how to remedy the situation? Here, I’ll save you some time:

“Son, I busted you trying to get around a rule I set, so you are grounded and I am taking your laptop away. I’m your parent, not your friend and since I know how to do this, I am setting a rule and you will follow it. Throwing a fit? Go clean the basement or I’m taking away your phone as well. And no, you can’t go out either.”
[doublepost=1538428440][/doublepost]

I was so pleased when I found a way to disable Screen Time.

If I want a babysitter who monitors how often I use my device, I'll hire one.

Same excuse people use for not having a bathroom scale.
Score: 6 Votes (Like | Disagree)

This is a pretty cynical move by Apple. They know that their devices are causing problems but they place the blame back on the user. It reminds me of the suggested serving size limits on junk food.

That's so misleading, their business model absolutely is based on how much people use their devices. The bigger and more absorbing the device is, the more apps and services you buy and Apple makes 30% on all sales. The more you use your device, the more likely you are to buy an iPhone XS Max than keep your old iPhone 6 which still works fine, etc.

Why is the user not to blame?

Apple doesn't force you to use your device too much.

This is the insane thought process of society of today. It's always some else's fault.
Score: 4 Votes (Like | Disagree)

Will.O.Bie
If you need Screen Time to tell you that you've been on IG, Twitter, YouTube, for a long time, then you have bigger problems than a buggy app. I've seen people walk into light poles, almost hit by a car, bumped into an old lady with a walker causing her to lose balance coz they can't seem to unglue their faces off their phones. It's the addiction that's the problem.
Score: 4 Votes (Like | Disagree)

sinsin07
I've been using the same screen time for years.
The clock.
When it reaches the end of their "screen time", devices are put away.
A check on the children to confirm.
All not in compliance will deal with the "consequences".
Score: 3 Votes (Like | Disagree)

Thanks goodness we have Nazi's like you to tell us all how to live. I can't believe I've raised a family, and been successful in my career without your guidance. Oh, please tell us all what else we must do - because you deem it so.

LOL so someone grounding their child for not listening to their parents’ rules is a “nazi” now? Jesus wept. If you’re so successful then you wouldn’t be on this board making excuses for someone saying their kid won’t listen to basic home rules. As for your career? No one cares about your job title or income when it comes to bad parenting. No one.
Score: 2 Votes (Like | Disagree)
Read All Comments

Wednesday May 5, 2021 1:29 am PDT by Tim Hardwick
Encrypted messaging app Signal has had a series of Instagram ads blocked from the social media platform, after it attempted to show users how much data the Facebook-owned company collects about them and how it's used to push targeted ads. In a blog post, Signal described how it generated the ads to show users why they were seeing them, simply by declaring upfront the information that the...
Read Full Article • 95 comments