Alongside the iPhone XS and iPhone XS Max, the Apple Watch Series 4 is now available for pre-order from Apple's online storefront and through the Apple Store app.

Apple Watch Series 4 marks the first ever design change for the Apple Watch since its debut, with the new models offering displays that are up to 30 percent larger along with a smaller, thinner case. The new models are available in 40 and 44mm size options, up from 38 and 42mm. 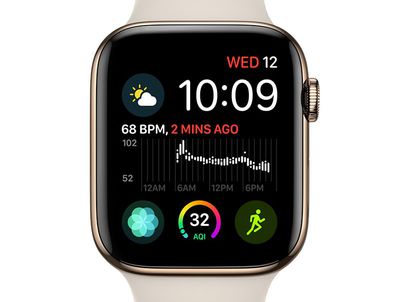 Several new watch faces have been designed for the Apple Watch Series 4 to take advantage of the additional screen real estate, and all models now use black ceramic and sapphire crystal backing for better cellular service.

Haptic feedback has been built into the Digital Crown, which is also equipped with electrodes to enable a new feature that lets the watch take an electrocardiogram (ECG) reading. Inside, the Apple Watch Series 4 is equipped with a faster, more efficient S4 chip and a next-generation accelerometer and gyroscope enable fall detection. Despite the new features, Series 4 models continue to offer "all-day" 18-hour battery life.

Supplies of the Apple Watch Series 4 could potentially be limited and the device may be in high demand given that it's a major upgrade over the Series 3, so customers interested in launch-day delivery should order as soon as possible.

Apple Watch Series 4 models are available in Silver, Space Gray, and Gold in both aluminum and stainless steel. Apple is offering multiple configurations and band options for the Series 4, with a full list of options available here.

The first Apple Watch Series 4 pre-orders are expected to arrive to customers on Friday, September 21, the official launch date for the device. Nike+ Series 4 models are available for pre-order today but won't be shipped out to customers until October 5.

The pre-approval process went smoothly. With a single click just now, I just pre-ordered an iPhone Xs Max (512,Gold) for me and an iPhone Xs (256,Gold) for the wife from Apple store. We are upgrading from the iPhone 7 generation. We upgrade our phones every 2 years. I’m looking forward to Face ID as to why I’m upgrading.

What are you having for breakfast though?
Score: 7 Votes (Like | Disagree)

Dates are slipping quick for the watches. iPhones are still good for the 21st delivery.

I would have replaced my phone if the update was worth it. There's nothing in the XS that makes me want to replace a X.
Score: 6 Votes (Like | Disagree)

Anybody else notice none of these pictures show the thickness of the watch? Looking on the official site, all the pictures and animations stop just short of showing where the back casing protrudes from the main casing. There is only one profile picture of the Digital Crown where it shows both casings but it cuts off the edge of the watch so you don’t get a sense of the thickness to main body ratio. And I can’t find the thickness listed anywhere on the site. (But I know from other websites that it’s thinner than the previous model but thicker than the original.) Can’t remember, did they do this with all the previous models?

Why? I was within the Apple Store within one minute of ‘going live’ to make my pre-order purchase, went straight to my ‘favorites’ that I selected for my Apple Watch and checked out immediately with no issues. Seamless.
Score: 4 Votes (Like | Disagree)

Ok so my biggest question is will this new watch face be available on a Series 3? Or is it only designed for the larger screen on the Series 4?

You get 4 new faces with Watch OS 5 if your on a Series 3. They are Breath, Fire and Water, Liquid Metal, and Vapor. The new faces with the cool complications seem to be on the Series 4 only.
Score: 3 Votes (Like | Disagree)

Dang...I’m torn up that I just spent $429 + taxes on a watch that will be slow as molasses in two years.

1. My Apple Watch original ain't slow, it's been 3yrs.
2. SS versions use Sapphire glass so idiots like me won't scratch the wash face unless it hits a diamond. :)
Score: 3 Votes (Like | Disagree)
Read All Comments