Apple announced new Apple Watch models at its Gather Round event today at the Steve Jobs Theater in Apple Park, Cupertino. The Apple Watch Series 4 will be available in 40mm and 44mm sizes – a step up from the 38mm and 42mm options of previous models – has a thinner body, and comes with a number of next-generation medical heart detection features approved by the FDA. 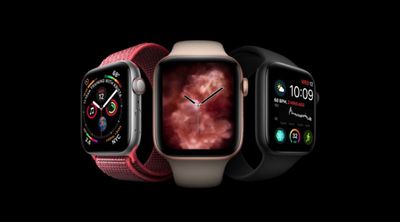 The new models have screens that are 30 percent larger than previous versions and, combined with a new user interface, allow watch faces to display up to eight complications, while native apps can show more information.

The Digital Crown has been re-engineered to include haptic feedback for better tactile responsiveness, the built-in speaker is 50 percent louder, and the microphone has been relocated, to reduce echo for better sound quality.

Meanwhile, new heart detection features, made possible via a new electrical heart sensor, include the ability to perform electrocardiogram (ECG) readings right out of the box, as well as detect low heart rhythm with background detection for atrial fibrillation, and low heart rate monitoring to detect very low blood flow from the heart.

The back of the Series 4 is made entirely of ceramic and sapphire crystal, with radio waves able to pass more freely through the front and rear, enabling better reception when using cellular functions. Despite the new tech, battery life remains on average the same as the previous generation Apple Watch, while running enthusiasts can now look forward to six hours' battery life when using outdoor workouts.

A new 64-bit Dual Core S4 processor provides up to 2x faster performance over previous generation models, and faster accelerometer and gyroscope technologies allow for better sensitivity, including the ability to detect a physical fall.

By analyzing wrist trajectory and impact acceleration, the Apple Watch Series 4 sends the user an alert after a fall, which can be dismissed or used to initiate a call to emergency services. If the device senses immobility for 60 seconds after the notification, it will automatically call emergency services and send a message along with location to emergency contacts.

Meanwhile, Apple Watch owners can reach their friends with a tap of the wrist with Walkie-Talkie, a watch-to-watch connection exclusive to watchOS 5 that allows communication around the world over Wi-Fi or cellular.

A new Nike+ collection for Series 4 features redesigned Nike watch faces, which match to the new band colors, including a Pure Platinum/Black Sport Band and a Summit White Sport Loop with reflective yarn. Meanwhile new Hermès variants introduce an assortment of color-blocked bands and watch faces that shift from one color to the other with the passage of the minute hand.

Apple Watch Series 4 pricing starts at $399 for GPS and $499 for LTE, while the Series 3 continues to be available but at the new lower price of $280. Orders for the new models and new bands open Friday, September 14, with availability beginning Friday, September 21, in Australia, Canada, China, Denmark, France, Germany, Hong Kong, Italy, Japan, Singapore, Spain, Sweden, Switzerland, the UAE, UK and US, with other countries later this year.

nviz22
Gotta hand it to Apple, they really are pushing some good health related functions w/ the Series 4.
Score: 34 Votes (Like | Disagree)

dojoman
Shut up and take my money.
Score: 22 Votes (Like | Disagree)

zakarhino
Was happy with my Series 2 but the ECG alone has me interested in an upgrade.
Score: 21 Votes (Like | Disagree)

nezr
I was hoping for better sleep tracking :(
Score: 17 Votes (Like | Disagree)

BMcCoy
Okay, this is good.
The watch is really evolving into a useful medical device.

ECG lead 1 isn't going to replace a full 12-lead ECG, but by golly it's a damn fine start!

I won't be buying one, but I like the direction they're going in...

So the fall detection does what?

Tell you later that you fell?

Tells you it is no longer summer.
Score: 13 Votes (Like | Disagree)
Read All Comments