The all-new Apple Watch Series 4 is just hours from being available for pre-order, with orders opening on Apple.com at 12:01 a.m. PDT on September 14. If you're still on the fence about jumping to the new generation, this post should help you discern all of the pros and cons between sticking with your Apple Watch Series 3 or going with the upgraded Apple Watch Series 4. 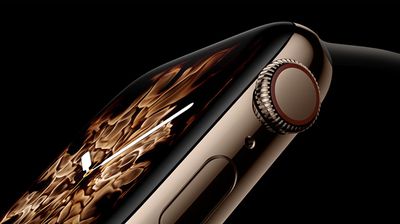 Likewise for the smaller models, the 38mm Series 3 has a 563 sq mm display area, compared to the 40mm Series 4 with a 759 sq mm display area. This results in a 35 percent display size increase between generations. In essence, this means that the Series 4 packs more screen into what is nearly the same package as the Series 3, with slimmer bezels that are somewhat visually similar to the rounded corners of the iPhone X and iPhone XS.

This is a change that shouldn't be too noticeable, unless you're comparing the Series 4 with a previous generation model side-by-side. And don't worry about this update affecting your current band collection, as Apple made it clear during yesterday's keynote that all previous Apple Watch bands will fit with the Series 4 case.

Looking at the thinness, Apple Watch Series 4 is just under 1mm slimmer compared to Series 3. Series 4 measures in at 10.7mm thin, compared to 11.4mm thin for Series 3.

As expected with an Apple update, the Series 4 has received a beefed up processor in the form of the 64-bit dual-core S4 processor.

Apple says that this is up to two times faster than the S3 processor found on the Series 3, enabling the Series 4 to be speedier when opening apps and performing other functions.

Exclusive to Apple Watch Series 4 are a collection of watch faces that take advantage of the enlarged displays to showcase as many as eight complications.

These complications have been enhanced to be more precise and provide more information, thanks to the increased display area.

There are also a few watch faces that will uniquely react to the edges of the Series 4's display, like Vapor, Liquid Metal, and Fire and Water.

For the first time in a wearable device, you'll be able to take a full ECG reading on Apple Watch Series 4. Using electrodes built into the Digital Crown and a new electrical heart rate sensor in the back crystal, an included ECG app will perform a reading when you touch the Digital Crown and hold it for 30 seconds.

The app can classify if your heart is beating in a normal pattern or if there are signs of Atrial Fibrillation, which could hint at potential health complications. You'll be able to save your ECG recordings in the iOS Health app and create a PDF to share with your doctor. While Apple Watch has always been able to track your heart rate, the ECG app is a major update to Apple's wearable line.

The ECG app will be added to Apple Watch Series 4 later this year, and will only be available to customers in the United States at launch.

Below you'll find a quick list of features that are new and exclusive to Apple Watch Series 4, which are unavailable on Series 3 and prior devices. We've also listed everything that hasn't changed further down, one notable constant being 18-hour battery life.

Changes between Series 3 and Series 4:

No changes between Series 3 and Series 4:

pbaker103
This will be a huge upgrade for me coming from my Series 0
Score: 12 Votes (Like | Disagree)

aolbites
I'd rather have a thicker case if it meant improved battery life.

Seriously, I mean the Series 4 has 1 hour less talk time than Series 3. It was bad enough when Apple was stagnating, but now it's going backwards.
Score: 7 Votes (Like | Disagree)

snej
A maybe noteworthy detail is that the Series 4 is still 0.2mm thicker than the Series 1 and 1st generation Apple Watch.
Score: 7 Votes (Like | Disagree)

Agit21
They didnt increase battery life which is sad. Going to wait for series 5.
Score: 6 Votes (Like | Disagree)

Sasparilla
Nice overview, thanks. While the 4 is more capable, for folks that don't have one yet, that 3 starting price point is awesome....the 3 is a great watch.
Score: 4 Votes (Like | Disagree)
Read All Comments

Monday January 24, 2022 9:20 am PST by Juli Clover
AT&T today announced the launch of upgraded AT&T Fiber plans, which support speeds of up to 5 Gigabits for some customers. There are two separate plans, one "2 GIG" plan and one "5 GIG" plan, available to new and existing AT&T Fiber subscribers. According to AT&T, the new plans are available to nearly 5.2 million customers across 70 metro areas including Los Angeles, Atlanta, Chicago, San...
Read Full Article • 168 comments