Following the introduction of Apple Watch Series 4 models at Steve Jobs Theater today, MacRumors and other media outlets were provided with some up-and-close hands-on time with the new lineup. 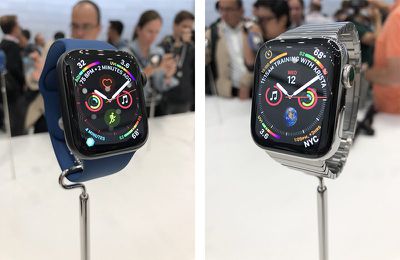 At first glance, the most obvious difference with Series 4 models is their larger displays, as Apple has significantly reduced the size of the bezels around the screen. The bezels now look similar to those on the iPhone X and newer, although the display is not completely edge to edge.

Taking advantage of the larger displays, Apple has redesigned the entire watchOS interface to provide more information with richer detail. A new Infograph watch face can accommodate up to eight complications.

Series 4 models are also ever slightly thinner than Series 3 models, measuring in at 10.7mm, compared to 11.4mm. Apple didn't allow me to test my Series 3 band with a Series 4 model, but it did confirm that both new and existing bands are compatible with all Apple Watch generations.

Apple Watch Series 4 has a new electrical heart sensor on the back side for electrocardiography, often shortened to ECG or EKG. This potentially life-saving functionality can indicate whether your heart rhythm shows signs of atrial fibrillation, a serious form of irregular heart rhythm.

Series 4 introduces some finishes, including gold stainless steel casing and a gold Milanese Loop. The back side on all the new models is now crafted from sapphire crystal and ceramic, whereas some Series 3 models had composite backs.

On the side of Series 4 models, the Digital Crown features a thin circle, which is black on GPS configurations and red on LTE configurations. By comparison, nearly the entire Digital Crown is red on Series 3 models with LTE. In my opinion, the new, subdued look of the crown is more aesthetically pleasing.

Overall, the Series 4 models do not represent a full-out redesign of the Apple Watch, but the larger displays and improved health monitoring tools are much welcomed features that are worth considering upgrading for.

Huge Apple product user here... Apple Watch was my main hope for this keynote, and while it looks good, they still lack in a few areas FitBit has them smoked in:

I am really on the fence here. I love the products, hate the price, and feel like some basic features are missing when FitBit can deliver this stuff on a $150 device.

go make a phone call on your fitbit. then scroll thru some pix. watch a vid maybe. answer a text. get directions to a concert. oh wait.....

they are NOT the same device. you want a fitbit buy a ***** fitbit. stop making annoying comparisons...
Score: 16 Votes (Like | Disagree)

e-coli
I wish the stock Apple Watch faces didn't look like ridiculous toys. I had to buy an Hermès edition to get an attractive face. What's more, if I wanted the Nike watch faces, I'd have to buy a whole separate Apple Watch. It'd be great if Apple just opened a Watch Face section of the App Store. They'd sell like crazy.
Score: 10 Votes (Like | Disagree)

Lucamegh
2 hours event and that's the only product I'm (mildly) interested in. Thanks Tim!
Score: 7 Votes (Like | Disagree)

HiRez
Bigger screen is nice but that still looks like a real fat bezel to me. They may be "similar to the new iPhones" in terms of the actual width of the bezel, but as a percentage of screen size, they're much larger. It's a shame they couldn't bring it out closer to the edge and either make the screen even bigger, or make the case smaller.

I could also do with a slightly less bulbous curvature on the edges of the screen, make it a little flatter with a slightly sharper rounding, it kind of feels like I'm looking into one of those snow globes or something.
Score: 6 Votes (Like | Disagree)

Ankaa
Bummer, it's really not THAT much thinner. It appeared really thin on the pictures that leaked/during the presentation, but I'm not quite sure what difference 0.7mm make in reality, particularly on the smaller model. Add the additional 2mm in size and it might look even bulkier on small wrists (such as women's) than the previous series. Absolutely not thrilled about the larger size, my series 2 looks bulky on my wrist as is. Again, bummer, because I LOVE the new display and functionality.
Score: 4 Votes (Like | Disagree)
Read All Comments