Apple's Online Store Goes Down Ahead of Today's 'Gather Round' Event

Apple's online store is down ahead of the company's "Gather Round" media event today at Steve Jobs Theater, at its Apple Park headquarters in Cupertino, California. The keynote begins at 10:00 a.m. Pacific Time. 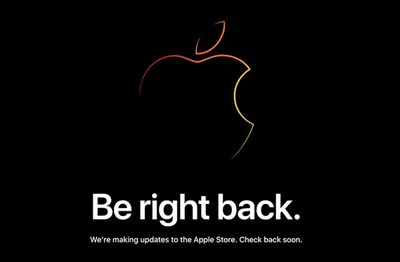 The iconic "we'll be back" message on Apple's website often foreshadows the launch of new products. At today's event, rumors suggest Apple will be introducing a trio of new iPhone models, Apple Watch Series 4 models, and new AirPods, along with detailing availability of its AirPower wireless charging mat.

Apple will also likely confirm availability of the final, publicly released versions of iOS 12, tvOS 12, watchOS 5, and macOS Mojave during today's event, or shortly after the event on Apple.com, once it returns online.

Rumors suggest Apple has a number of other products in the pipeline this year, including iPad Pro models with Face ID, a lower-priced MacBook of some kind, refreshed iMac models, and a new pro-focused Mac mini, but it's unclear if any will be announced today, at a potential October event, or via press releases.

As last-minute rumors, Apple analyst Ming-Chi Kuo on Monday predicted that the next-generation iPad Pro models will feature a USB-C port, while the new lower-priced MacBook will support Touch ID, but without a Touch Bar.

Look for today's event to run for around two hours, although if Apple plans on fitting all of its rumored products into its September keynote, then we could be in store for more of a marathon showing. Apple will provide a live stream of the event on the web and through its Apple Events app for the Apple TV.

MacRumors will be covering the event live from Steve Jobs Theater, with a live blog, hands-on photos, news stories, videos, and live tweets via @MacRumorsLive on Twitter. Mac users can get MacRumors headlines delivered to their desktops instantly by enabling Safari push notifications.

MacRumors readers can follow along in our forums, which are a great place to discuss the announcements before, during, and after the event. Be sure to keep tabs on the iPhone and Apple Watch sections in particular.

rodpascoe
Why can't a trillion dollar company just have the store changeover after the announcement?

Does the 'hype' of having the store go down outweigh all the lost orders today?

It's all about the hype.
Score: 6 Votes (Like | Disagree)

Why can't a trillion dollar company just have the store changeover after the announcement?

Does the 'hype' of having the store go down outweigh all the lost orders today?

If somebody's going to order an Apple product, I doubt they'll switch ecosystems and get a different product for the sake of waiting a few hours.

And if not, what about the orders that were made for an item that is no longer sold from today? Would they automatically change the order to the equivalent priced item or specced item, and then that's a whole load of work that could otherwise have been avoided...

Yeah sure it's going down mainly for hype, but I can see why they do it too. Keep it simple. Store goes down, store goes up. It's not really comparable to Amazon where almost everything is a third-party product and it doesn't matter if there's a sudden price drop or it's discontinued.
Score: 4 Votes (Like | Disagree)