Google today sent out invitations to members of the media for a "Made by Google" event that's set to be held in New York City on Tuesday, October 9.

At the event, Google is likely to unveil its Google Pixel 3 and Pixel 3 XL smartphones, which will be competing with the trio of new iPhones that Apple is set to unveil next week.

Details about the Pixel 3 and Pixel 3 XL have already leaked thanks to multiple hardware units and images that have surfaced from Russian bloggers and a device that was left in a Lyft. 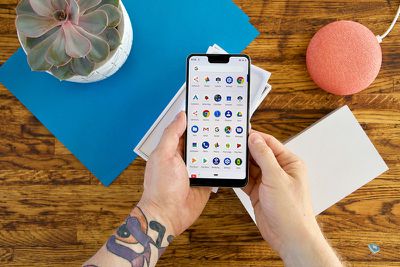 Image via Mobile-review.com
The 6.2-inch Pixel 3 XL will feature a deep iPhone X-style notch that's been the subject of jokes on the internet since early images leaked, while it looks like the smaller 5.5-inch Pixel 3 will be notchless.
Wireless charging will be available on both devices through glass rear shells, and the two smartphones will feature single-lens rear cameras and dual front-facing cameras. A fingerprint sensor is located at the back of each device, and given the inclusion of USB-C headphones and a USB-C to audio jack device, it looks like the Pixel 3 will not feature a headphone jack.

Image via Mobile-review.com
In past years, Google has unveiled multiple other products at fall events, so there are likely other devices Google is set to debut aside from the Pixel 3 and Pixel 3 XL.

Apple is unveiling its own new 2018 smartphone lineup a month ahead of Google on Wednesday, September 12. Rumors suggest we can expect to see a 5.8-inch OLED iPhone Xs, a 6.5-inch OLED iPhone Xs Max, and lower-priced 6.1-inch iPhone with an LCD display.

Dammit Cubs
Why are people so against the notch - it's extra pixels you wouldn't have had otherwise. Think glass half full instead half empty.
Score: 15 Votes (Like | Disagree)

Risky having event month after apples

Why is it risky? This will be the third year in a row for them to have an event at this time. It's a whole month later. Nothing risky going on.
Score: 13 Votes (Like | Disagree)

BornAgainMac
The notch detracts from the huge beard on that phone.
Score: 12 Votes (Like | Disagree)

Baymowe335
And they won't matter as usual, particularly after everyone wants the new iPhones.
Score: 12 Votes (Like | Disagree)

macduke
And people give Apple crap, lol. Looking forward to Samsung's notch next.
Score: 10 Votes (Like | Disagree)
Read All Comments

Saturday May 21, 2022 9:00 am PDT by Hartley Charlton
With around four months to go before Apple is expected to unveil the iPhone 14 lineup, the overwhelming majority of rumors related to the new devices so far have focused on the iPhone 14 Pro, rather than the standard iPhone 14 – leading to questions about how different the iPhone 14 will actually be from its predecessor, the iPhone 13. The iPhone 14 Pro and iPhone 14 Pro Max are expected...
Read Full Article • 283 comments