The vulnerability was discovered by security researchers Phobia and Nicholas "Convict" Ceraolo, who also found a similar flaw in the website for phone insurance company Asurion that exposed AT&T account PINs.

Both Apple and Asurion fixed the website flaws that left the PINs vulnerable after learning about them from BuzzFeed News. Apple opted not to provide further comment on the situation, but told BuzzFeed News that it is "very grateful to the researchers who found the flaw." 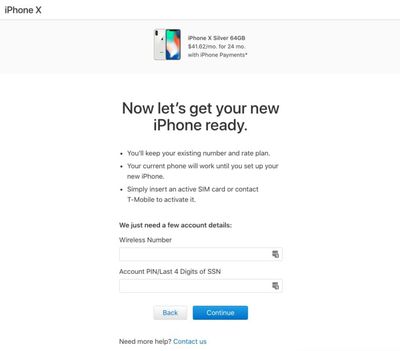 The page on Apple's site that let hackers brute force PINs, via BuzzFeed News
PINs, or passcodes, are numbers that are used as an additional account security measure by many carriers in the United States. Mobile device PINs are typically a last line of defense for a cellular account as both carrier websites and support staff will ask for the PIN for confirmation before making account changes.

SIM hacking, which uses social engineering to get carrier support staff to transfer a person's phone number to a new SIM, has become increasingly prevalent due to the number of accounts (bank, email, social media, etc.) that are tied to a person's phone number. A PIN is used as a defense mechanism against SIM hacking, which means exposed PINs can be particularly dangerous.

Accessing the T-Mobile PINs on Apple's website involved a brute force attack where a hacker used software to input multiple different numeric combinations to guess the proper one.

As BuzzFeed News explains, after initiating a T-Mobile iPhone purchase on the Apple online store and selecting monthly payment options through T-Mobile, Apple's site directs users to an authentication form asking for a T-Mobile number and account PIN or last four digits of a social security number (which most carriers use in place of a PIN when one has not been set).

The security vulnerability appears to have been limited to T-Mobile accounts, as the same validation page for other carriers on Apple's site uses a rate limit that locks access to the form for 60 minutes after five to 10 incorrect entries. Given that the other carrier pages had rate limiting enabled, it's likely Apple made an error on the T-Mobile page.

According to Ceraolo, the vulnerability is likely due to an engineering mistake made when connecting T-Mobile's account validation API to Apple's website.

A similar vulnerability on Asurion's website exposed an unspecified number of AT&T account PINs. An AT&T spokesperson said that it is working with Asurion to investigate the issue and will "take any additional action that may be appropriate."

A phone number was required for both of these attacks, limiting the number of people who may have been impacted, but AT&T and T-Mobile customers who are concerned about their account safety should choose a new PIN.

mistasopz
But forum members told me that Apple had the best security. Well except for those times when they didn't. Like the root password gate where you didn't have to put a password in to gain root access.
Score: 41 Votes (Like | Disagree)

But forum members told me that Apple had the best security. Well except for those times when they didn't. Like the root password gate where you didn't have to put a password in to gain root access.

Having the best security =/= flawless security. No tech company is completely flawless. But go ahead and chastise Apple for not being absolutely perfect, because that's so productive.
Score: 24 Votes (Like | Disagree)

Doctor Q
Four digits isn't a very long PIN. Even if the software now locks access to the form for 60 minutes after five to 10 incorrect entries, it doesn't block the exploit, just slow it down.

mi7chy
Apple don't care about security because even after several security incidents customers are brain washed into thinking Apple is flawless.
Score: 10 Votes (Like | Disagree)

zakarhino
Security issue after security issue for T-Mobile and many carriers in general. Remember when T-Mo Germany said they don't need to salt their passwords because their security is "that good"? Or when it was discovered that it's very easy to get access to a T-Mo account AND clone people's sims because T-Mo doesn't have very good security practices beyond asking for the last 4 of your SSN? I've heard stories of people phoning up carriers under the guise of being a store employee and they get access to all sorts of information without thorough identity verification!

I know Apple are the guys that purportedly screwed up here but when you look at T-Mobile's security in general, it doesn't have a very good track record, it should have never been possible for the Tmo verification API to allow unlimited requests without a time limit. These carriers need to seriously update their security practices. Just accepting the last 4 digits of your social security number is no longer a viable option.
Score: 8 Votes (Like | Disagree)

Thursday September 29, 2022 12:38 pm PDT by Juli Clover
Tony Blevins, Apple's vice president of procurement, is set to depart the company after he made a crude comment about his profession in a recent TikTok video, reports Bloomberg. Blevins was in a video by TikTok creator Daniel Mac, who was doing a series on the jobs of people he spotted with expensive cars. After seeing Blevins in an expensive Mercedes-Benz SLR McLaren, Mac asked Blevins what ...
Read Full Article • 696 comments