Alleged leaked images of a case for one of the upcoming redesigned iPad Pro models were shared by Slashleaks today showing a mysterious new cutout on the back.

Reliable Apple analyst Ming-Chi Kuo has said Apple is working on two new iPad Pro models, to measure 11 and 12.9-inches. These images are said to be for the "10.5-inch" model – likely a reference to the new 11-inch device with slimmer bezels and a corresponding larger display – and reveal a pill-shaped hollow on the rear of the case that is horizontally aligned with the Lightning connector. 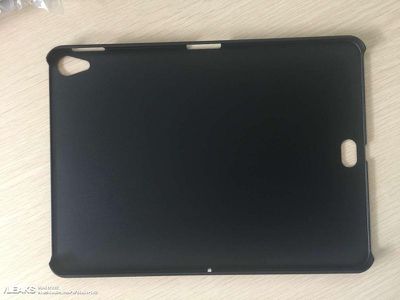 The case images hark back to a July Mac Otakara report suggesting Apple has relocated the Smart Connector on its upcoming redesigned iPad Pro models from the side to the bottom near the Lightning port.

Shortly after the Mac Otakara report emerged, an alleged CAD image shared by mobile leaker Steve Hemmerstoffer appeared to depict the Smart Connector gone from its usual place and a new oblong indentation near the Lightning port.

The cutout in today's alleged iPad case leak looks just like the indentation in the CAD render, however unlike the render this case still has a horizontal cutout similar to where a Smart Connector resides on the current crop of iPad Pro models, albeit on the opposite side of the device alongside the volume buttons.

The image throws up a number of questions. Not least of those is how a proposed Smart Connector on the bottom of an iPad Pro would work with Apple's Smart Keyboard accessory.

The relocated connector would require a new vertically oriented Smart Keyboard, but a keyboard in that orientation would presumably be unstable, especially for the larger iPad Pro, plus it would likely be unsuitable for Office-style productivity work.

Alleged CAD image of new iPad Pro via @OnLeaks
Mac Otakara has suggested that Apple is making the change because Face ID will work only when the iPad Pro is in a vertical orientation. However, previous information from Mac Otakara suggested Apple was working on horizontal Face ID in iOS 12 for the new iPad Pro models, which are expected to incorporate Apple's TrueDepth Camera system first introduced on the iPhone X.

But what if the new pill-shaped hollow in the alleged case images is actually for something other than a new Smart Connector, as suggested by the continuing existence of a horizontal cutout?

Is it a magnetic alignment for another type of keyboard or accessory? A wireless charging contact? USB-C? The (highly unlikely) relocation of Touch ID in lieu of support for horizontal Face ID? Let us know your thoughts in the comments below.

Zxxv
That’s where an image of a middle finger will be. Just above the removed headphone jack.
Score: 18 Votes (Like | Disagree)

iapplelove
I’m still waiting on part leaks to come out of the factory.

But maybe the screen is so big, it’s tough to sneak out a full size screen without a home button but with a notch.

ah, the new location of the touch id sensor.

I doubt it. Apple has said repeatedly Face ID is the future.

I bet in two years or less even Macs will ditch Touch ID and incorporate Face ID. Makes even more sense on computers.
Score: 9 Votes (Like | Disagree)

Second FaceID camera? I'll go with that, it's the only way they would be able to have it work in landscape.

how come? faceID on the back? this makes no sense
Score: 7 Votes (Like | Disagree)

MrGimper
Personally, I think this case is just some BS leaked to throw us all off. Nothing makes sense... smart connector in portrait mode? Existing smart connector relocated to where the volume buttons are is clumsy. The potential microphone hole where the smart connector was. All totally bizarre
Score: 6 Votes (Like | Disagree)
Read All Comments