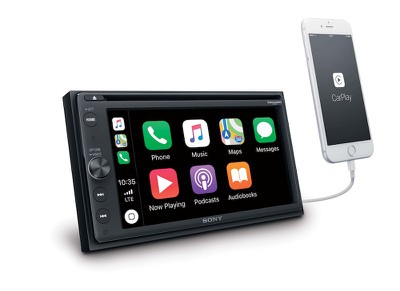 The XAV-AX210 is an update to Sony's year-old XAV-AX200 receiver, with the headline new feature being support for iDatalink Maestro, a car audio system that seamlessly interfaces with steering wheel controls, amplifier functions, on-screen vehicle settings, and more when used outside of CarPlay mode.

The receiver has a 6.4-inch touchscreen, but Sony hasn't specified if it's resistive or capacitive. Other key features include hands-free phone calls and music playback via Bluetooth, SiriusXM compatibility, rear view camera readiness, a built-in four-channel amplifier, and a built-in CD/DVD player.

This product is ideal for vehicles that don't come with factory installed CarPlay, mirroring several apps onto the dashboard, including Phone, Messages, Apple Maps, Apple Music, Spotify, and starting with iOS 12, Google Maps and Waze. As a wired system, an iPhone must be connected via Lightning cable.

Sony said XAV-AX210 pricing and availability in North America will be announced in the fall of 2018. It will likely have a similar price as the XAV-AX200, available on Amazon for between $399 and $499 depending on configuration.

Of note, the XAV-AX100 and XAV-AX200 have received favorable reviews from publications such as The Wirecutter.

Other brands with aftermarket CarPlay and Android Auto receivers include Alpine, Pioneer, JVC, Kenwood, and Clarion.

macduke
What is the point of touting wireless connectivity if it has to be plugged in for CarPlay anyway? I'm tired of all these overpriced wired systems, many of which are resistive touch. I can get an iPad for $300 or a Nintendo Switch for $250 but not a little display that plugs into my car and interfaces with my phone? It's also annoying that all the high end models have crap we don't need like DVD players. This market is prime for someone to come in and shake it up.
Score: 10 Votes (Like | Disagree)

diddl14
Still don‘t get why these things come with DVD/CD...
Score: 7 Votes (Like | Disagree)

Are things really "top-rated" if they are just being unveiled and haven't properly been "rated"?
And who rated it?

The previous version of this was “top rated”. Sony has unveiled a new version.
Score: 6 Votes (Like | Disagree)

Spock
I honestly wish Apple would just enable CarPlay on the phone. Maybe a NFC dock that tells the iPhone it’s in the dock and connected to Bluetooth and automatically enables CarPlay.
Score: 4 Votes (Like | Disagree)

philfry
I have the XAV-AX100 and i'm very happy with it. It is resistive but I don't even notice. For the price it was really nice and BestBuy installed it for free. I've heard that wireless carplay consumes battery fast but I haven't used it myself. Plus the wireless carplay systems were more than double of the $300 that I paid. I really don't mind plugging in my phone especially if i'm going to be in the car for awhile.
Score: 2 Votes (Like | Disagree)

[AUT] Thomas
Would instantly buy (even for 800+ bucks) if it would fullfill all of the below requiremets:

* no optical drive
* thus not deeper than absolutely necessary, I got limited space on my lower slot
* some physical buttons for basic controls
* a very bright, high contrast screen, where black is actually black and not grey. We don't need to save energy here, just fire it up!

* cinch outputs on the back for the sub

* SD-card on the front
* 1280x800 pixels please at least... because we are in 2018... 800x480 is a joke even for automotive use...
* built-in GPS quad receiver (NAVSTAR, GLONASS, GALILEO, BEIDOU), also because we are in 2018
* also, the ability to mix rather than switch inputs would be highly appreciated, but for some reason OEMs lack the innovation for that...
* Bluetooth 4.0 at very least
* good quality handsfree
* top audio quality for music

* firmware upgrade support & bug fixes for the next 2 years unless we are talking matured software...
* Proper cooling would be nice too... why the miniature fans in double DIN units?
* (!) Screen not polarized in a way that makes it unreadable with sunglasses...

...maybe some more items...
Anything less than that doesn't justify 800+... the Sonys are well priced, but Pioneers are way too expensive...
Score: 2 Votes (Like | Disagree)
Read All Comments