On August 15, 1998, Apple officially released the first iMac, the candy-colored gumdrop-shaped iMac G3, launching a desktop machine that has continued to be updated and revised over the years.

Designed by Apple design chief Jony Ive, the iMac G3 was unique among computers at the time for its unusual shape, the use of translucent plastics that allowed the internals to be visible, and the bright colors that Apple adopted. 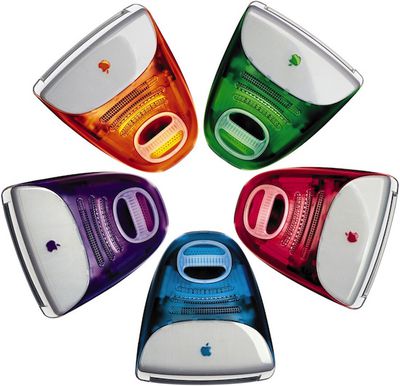 "This is iMac. The whole thing is translucent. You can see into it. It's so cool," said Jobs when introducing the iMac G3.

Apple's first iMac, which sold for $1,299 at launch, came equipped with a 233 - 700MHz PowerPC 750 G3 processor, 4GB of storage, a 15-inch CRT, a CD-ROM drive, and an ATI graphics card, components that don't sound impressive today but made for a powerful, well-rounded machine, that, in combination with the design, made the iMac a best seller.


At launch, and in the years following its release, Apple released the iMac G3 in a slew of shades that include the famous Bondi Blue, Blueberry, Grape, Graphite, Indigo, Lime, Sage, Strawberry, Ruby, Snow, Tangerine, and two patterned colors, Blue Dalmatian and Flower Power.

If you live near Michigan, all 13 colors of the original iMac G3 are on display at the Henry Ford Museum in a popup collection called "Looking Through Things," which has been introduced in celebration of the iMac's anniversary.

The iMac G3 was introduced just a year after Steve Jobs returned to lead Apple, and it came at a time when the company was still struggling and trying to find its footing. By 1999, Apple saw its first quarter profits more than triple, with the jump attributed to sales of the new iMac.

Apple in May celebrated the anniversary of the debut of the iMac G3, which, while launched in August, was first introduced by Jobs in May 1998.

20 years ago today, Steve introduced the world to iMac. It set Apple on a new course and forever changed the way people look at computers. pic.twitter.com/GbKno7YBHl — Tim Cook (@tim_cook) May 6, 2018

We also have an iMac Pro, a workstation class machine aimed at Apple's professional users with a unique Space Gray body, Xeon processors with up to 18 cores, Radeon Pro Vega graphics, and up to 4TB of SSD storage.

We're still expecting refreshed iMac models in 2018. There's no word on when the next design change is coming, but in 2018, Apple is expected to add 8th-generation Coffee Lake chips and other internal improvements that make a great desktop machine even better.

green86
No SCSI! No ADB! No expansion slots! No floppy!

USB isn't mature enough to really solely on it!

Steve Jobs wouldn’t have ever allowed this! 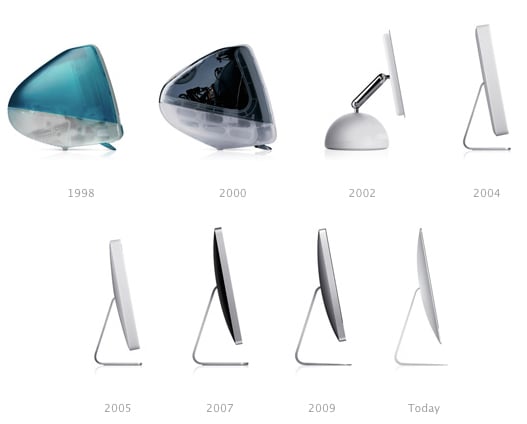 asdavis10
Arguably the most important product of Apple's lifetime.
Score: 21 Votes (Like | Disagree)

simonmet
I still have feelings for those first iMacs. I never got one and can't remember which colour I wanted the most, but do remember wanting it bad.

I feel nothing for recent iMacs. Absolutely nothing. They're superior in every way yet they don't have an ounce of personality. They're bland, utilitarian tools; design simplified into nothingness. The lampshade iMac was the last to have real personality. Then it started going downhill; first with the iMac G5 and then with each subsequent iMac until what we have today, which is just an evolution of the G5 design.
Score: 21 Votes (Like | Disagree)

James_C
Old(ish) and New(ish) iMac - 2003 iMac (17" 1.25GHz USB2 ) that i recently acquired and replaced the Hard Disk with an SSD, added a Airport Extreme card, added BlueTooth for the Magic Mouse and upgraded the RAM to 2GB. The iMac on the left is a 2016 5K iMac. I always loved the 'Globe' iMac and the 'Lick-able' Aqua UI.