Chase, one of the major banks in the United States, today announced that customers can now use Apple Pay and other mobile wallet services at nearly all of the company's 16,000 ATMs, which have been upgraded with card-free access.

To access an ATM and withdraw money, customers no longer need a physical debit card or access code for authentication, with the contactless ATMs supporting a "tap" from a smartphone to use the ATM. 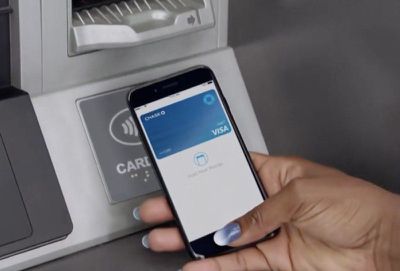 On its website, Chase walks users through the steps necessary to use the new ATM functionality.

For iPhone users, after adding a Chase card to the Wallet app on the iPhone, at an ATM, customers will need to open up the Wallet app, select the virtual Chase debit card and tap the iPhone on the "Cardless" symbol on the ATM, authenticating via Face ID or Touch ID.

A PIN code will need to be entered for verification purposes, so it's not quite as simple as a standard payment with Apple Pay, but it does prevent Chase card users from needing to pull out a physical card.

Chase says that cardless ATM access is available to all customers with a Chase debit or Liquid card that's been added to Apple Pay, Google Pay, or Samsung Pay. All Chase ATMs with the Cardless symbol support Apple Pay.

Chase first announced plans to update its ATMs with contactless money withdrawals in 2016, and has since then been rolling out the technology. Today's update suggests the rollout is nearly complete and available to most Chase customers.

MyMacintosh
Was literally at my Chase atm the other day wondering when this would be a thing. Thank God!
Score: 7 Votes (Like | Disagree)

I can't even remember the last time I used an ATM. If I get birthday money that small amount is more than enough to last me the entire year for cash only purchases.

We need to get you buying more weed.
Score: 6 Votes (Like | Disagree)


I guess I'm not seeing an advantage here...

You can double tap power button on the iPhone X or double click the home button to bring up the wallet from the home screen. Doing this instant authenticates me as I do it.
Score: 5 Votes (Like | Disagree)


I guess I'm not seeing an advantage here...

The advantage is that you don't have to carry or babysit a card anymore. Your instructions are a bit biased towards the card though--I'd argue that carrying/retrieving a card that is located in a wallet that is possibly located in a bag has at least as many steps as using your iPhone.

My instructions for card use would look like this:

And for anyone that uses an Apple Watch and has their Chase card set as the default payment, it's literally as easy as pressing the watch's side button twice and holding it to the pad. This is how I do all of my ApplePay transactions--there's no way it's easier to use a card.
Score: 4 Votes (Like | Disagree)

I7guy
Apple is on a roll with Apple Pay. I wish my bank would enable Apple Pay withdrawals.
Score: 4 Votes (Like | Disagree)
Read All Comments