Have a question about the HomePod?

Apple announced that it will be hosting a HomePod live event in its Support Communities on Wednesday, July 25, providing customers with an opportunity to ask Apple support representatives questions about the Siri-enabled speaker. 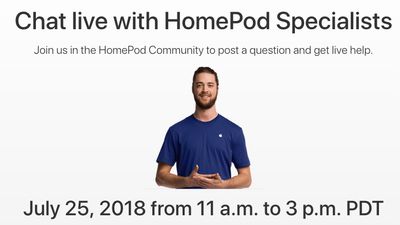 Specialists will be on hand between 11 a.m. and 3 p.m. Pacific Time, answering questions about a variety of topics in real time:

Discover how to make HomePod your own: use AirPlay 2, create a stereo pair, personalize your setup and settings, ask Siri, and more. During this live event, Apple HomePod Specialists will be available to help you get the most from your HomePod.

To participate in the event when it goes live, head to the HomePod Community on the Apple Support Communities, sign in to or create an Apple ID account, click Post > Discussion in the upper-right corner, and submit a question.

Specialists already monitor the Apple Support Communities, and occasionally answer questions, but this event should lead to faster answers.

It'll be interesting to see how this goes.

kstotlani
Isn’t it ironic that you have to ask human beings about how to use a device powered by artificial intelligence.
Score: 48 Votes (Like | Disagree)

bmustaf
If they can answer the question of "How the hell is my HomePod/Siri so damn stupid?" I will be satisfied.

I have a HomePod sitting next to an Echo show. I always *want* to use the HomePod because the microphones and speaker are so far superior, but what good is being heard and hearing great audio back when it's never what you asked for and usually "Sorry, I can't do that on HomePod".
Score: 30 Votes (Like | Disagree)

Traverse
While I think this is a good think, it’s a bit unusual. I think it shows that the general community either isn’t sold on the device or really doesn’t understand more than its basic functionality.

I love my two (and really want a third), but it’s not super simple to manage. I think the home app I’m general is not very intuitive.
Score: 21 Votes (Like | Disagree)

bmustaf
Well, I wanted more than a $350 egg timer that sounds great (and frankly was promised better/more). But it IS an AAPL product so I probably should have known that $350 for an egg timer is considered "a great thing" in the Apple reality distortion field and that I'm the unreasonable one for actually wanting something more than a beautiful device that really doesn't do what others do.

1) Get me an answer about something simple (that alexa and google assistant fire on with pretty damn good reliability) like "Tell me about the paul manafort issue".

2) *ANY* third party app data/task that isn't HomeKit. Integrations/skills - totally lacking, SiriKit is a joke on iPhone, it's even more pathetic on HomePod. Alexa can drive all kinds of things remotely and on its own, while HomePod can't even set a reminder unless my iPhone is on the same WiFi network.

3) Like I finished with above, even Apple's OWN ecosystem of things can't/don't work on it unless there's an iPhone on the same network. Sometimes my phone is in my car, it's dead, I forgot it at the office or home, whatever.

But you are correct: It's a brilliant speaker, but that is all it is, a brilliant speaker. *ALTHOUGH* even in that, no Bluetooth pairing support? Really? Yeah, AP2 exists, it's quality is ostensibly better, but sometimes I have friends come over with Android devices who want to play stuff and AirPlay 2 adoption sucks, soooo, no cigar on the HomePod. Even myself, AirPlay 2 itself is pretty damn buggy esp in larger WiFi networks, there are times I *wish* playing music off my iPhone would just use normal BT and not all the fanciness (and attendant things that also can go wrong) with more complex protocols like AP2.

Apple's whole thing is "our **** just works" (at least for me). It's never the fastest (despite the claims/reality distortion field). It's never the most modern (cute, the MBP just got DDR4 and 32GB and still has a keyboard that doesn't work). But I still buy it and pay the premium because, like I said, it just works without much fuss.

I've had way too much fuss, "I'm sorry, I am useless" from Siri, etc on HomePod, and not nearly enough "wow, it does this really well to forgive these other things". But if all you need to do is say "hey play this play list", it's probably the best sounding speaker in that price range that does that in one box without a phone attached. But it's not a smart speaker.

What are you asking HomePod to do? I've rarely had a misfire when asking for any music, timers, and general trivia questions.

busyscott
Ya, I have a lot of questions. Number one: How dare you.
Score: 14 Votes (Like | Disagree)
Read All Comments