Apple today announced the launch of a $300 million investment fund in China which is designed to connect Apple's suppliers with renewable energy sources.

Apple, along with 10 initial suppliers, is investing $300 million into the China Clean Energy Fund over the course of the next four years. Apple says the fund will invest in and develop clean energy projects totaling more than 1 gigawatt of renewable energy in China, which is equivalent to powering close to 1 million homes. 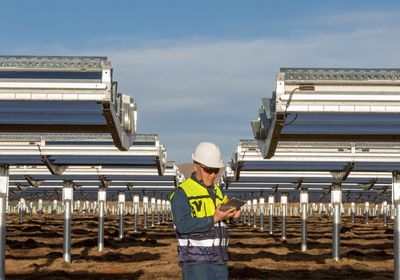 Apple's new fund will be managed by DWS Group, a company that specializes in sustainable investments. DWS also plans to invest in the fund.

"At Apple, we are proud to join with companies that are stepping up to address the climate challenge," said Lisa Jackson, Apple's vice president of Environment, Policy and Social Initiatives. "We're thrilled so many of our suppliers are participating in the fund and hope this model can be replicated globally to help businesses of all sizes make a significant positive impact on our planet."

According to Apple, the China Clean Energy Fund will provide participates with the advantage of greater purchasing power and the ability to attain "more attractive and diverse" clean energy solutions.

Apple earlier this year announced that all of its facilities around the world are powered by 100 percent renewable energy, a milestone achievement for the company.

Since the launch of its Supplier Clean Energy Program in 2015, 23 manufacturing partners across 10 countries have committed to powering their Apple production lines with 100 percent clean energy.

Wow! China is not exactly known for being environmentally friendly. Their pollution is one of the worst, if not the worst, in the world. I'm sure it took great "courage" to convince them to even entertain this type of project.

Actually, China is known for aggressively pushing for renewable more than almost anyone to fix the very pollution issue you mentioned. It’s been the case for many years now and that’s why they are far ahead of the US in their embrace of renewables already.
Score: 14 Votes (Like | Disagree)

JPack
A single city in China has more electric buses than fossil buses from all U.S. cities combined. They have the largest solar farm in the world. Also the largest market for plug-in vehicles.

hagar
Too bad the USA are more focused on clean coal. This would have been a great investment.
Score: 7 Votes (Like | Disagree)

A single city in China has more electric buses than all U.S. cities combined. They have the largest solar farm in the world. Also the largest market for plug-in vehicles.

That is certainly something for us all to think seriously about.
Score: 3 Votes (Like | Disagree)

Too bad the USA are more focused on “clean” coal. This would have been a great investment.

Wow! China is not exactly known for being environmentally friendly. Their pollution is one of the worst, if not the worst, in the world. I'm sure it took great "courage" to convince them to even entertain this type of project.

China is shaming everyone with their clean energy investments, including, for example they’re aiming for an entirely electric car fleet by 2030. Can America, with our current administration, and our oil drilling expansion, and our removing mountains for coal, say that?
Score: 3 Votes (Like | Disagree)

I look forward to China (the country with advancements in renewables) donating money to the US to help with pollution and clean energy.

We don’t need (or frankly deserve) it. If we want clean energy, it’s our responsibility to vote accordingly either in elections or with our money.
[doublepost=1531445694][/doublepost]

They’re very often one and the same in China.

And everywhere else. Exhibits A, B and C are Monsanto, Boeing, and Lockheed.
Score: 2 Votes (Like | Disagree)
Read All Comments