Microsoft yesterday unveiled the 10-inch Surface Go, the company's smallest and lightest tablet computer to date. Priced at $399, the device is aimed at the same $500-and-under market as Apple's 9.7-inch iPad, which starts at $329.

Looks-wise, the Go is basically a smaller version of the $799 Surface Pro, including the integrated kickstand and a front-facing camera above the 1800 x 1200 resolution IPS touchscreen display. 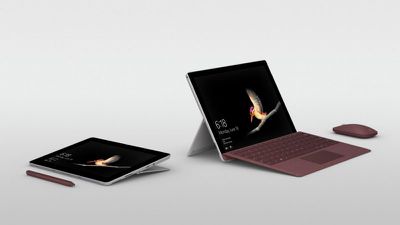 On the right side of the Go is a magnetic Surface Connector port for charging and connecting to a desktop dock, one USB-C port, and a headphone jack, with a microSD card slot located underneath the hinge.

Inside, the Go features a fanless Kaby Lake dual-core Intel Pentium Gold processor, 4GB or 8GB RAM, and 64GB or 128GB solid-state storage. Microsoft claims the Go has up to 9 hours of battery life.

Weighing in at 1.15lbs, the Go is slightly heavier than Apple's iPad. Like the Surface Pro, the Go supports the $99 Surface Pen (Apple added Apple Pencil support to its $329 iPad in March) and optional keyboard cover, which starts at $99 in black, with four color options costing $129. The optional Surface Mobile Mouse costs $35.


Off the shelf, Surface Go devices will run Windows 10 in "S mode", a streamlined version of Microsoft's desktop OS that only runs verified apps downloaded from the Windows Store, although customers can switch to the regular version of Windows 10 at no additional cost. For business customers, Microsoft is also offering a Surface Go with Windows 10 Pro installed for $449.

The $399 Surface Go ships August 2 in the U.S. and two dozen other markets, with Wi-Fi versions available initially and LTE versions to come later in the year.

Windows S is going to hamstring this, given that you can only run apps from the windows app store.

no hamstring since you can upgrade to regular windows for free.
Score: 31 Votes (Like | Disagree)

Who is this for?

Those who want to experience the pain of Windows 10 in a more portable and affordable form-factor. :p
Score: 20 Votes (Like | Disagree)

architect1337
There is such a lot of misinformation out there. If you are going to compare to Apple products, at least be fair. Windows 10 S means you can only install apps from the Microsoft store. It does run full Windows 10 home. You can upgrade, one way, to Windows 10 Home (Full) and install apps from anywhere. Most people, who just want to use the standard apps (Mail, Calendat, web etc) will find Windows 10 S more secure (which it is) compared to unrestricted. This is similar to Mac's Gatekeeper where you can set up a Mac to only install from App Store. An advantage of Gatekeeper is that you can turn this on. The downside is you can't get a Mac for $400 so with iOs, there is only the store.

Apart from that - it all depends if you want to use Windows or iOS. To me - the specs seem reasonable. You are not going to be gaming but you'll be able to use it as a good educational product if you want. I think it's a serious contender to the iPad if Windows is your thing. The only downside is it's too expensive once you add a keyboard (which you'll probably need) - wheras for an iPad, you can easily get away with not having one.
Score: 16 Votes (Like | Disagree)

farewelwilliams
no thanks. i'll wait until Microsoft figures out how to do Windows Updates properly.
Score: 15 Votes (Like | Disagree)

jayducharme
I’m sure it will provide the same delightful user experience for which MS is famous.
Score: 15 Votes (Like | Disagree)
Read All Comments