Apple today seeded the second public beta of iOS 12 to public beta testers, giving non-developers a chance to test the software ahead of its upcoming fall release. The second iOS 12 public beta, which comes one week after the first public beta, corresponds to the third developer beta released on Tuesday. 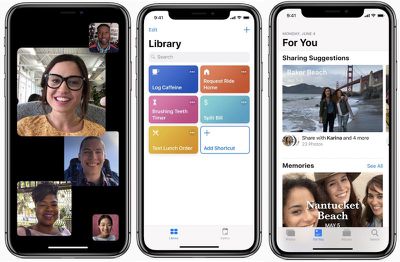 The new iOS 12 beta includes a rebuilt Maps app with a new Apple-designed Maps engine that's available in the San Francisco Bay Area at the current time. While limited to the San Francisco area at this time, the features will roll out to Northern California in the fall before expanding to additional locations across the United States in late 2018 and 2019.

Today's update also includes a new interface for the Voice Memos app on iPad, a relocated Share My Location setting, options to clear all notifications on iPad with a long press, and the removal of the haptic feedback buzzing that occurred whenever an iPhone 6s or later was unlocked with the Touch ID Home button.

Subscribe to the MacRumors YouTube channel for more videos.
Animoji, stickers, text, and more can be used in FaceTime and the Messages app, and there's a new Screen Time feature to help customers understand and manage the amount of time they're spending on their iOS devices. There are options to limit app time and Screen Time also includes comprehensive parental control tools.

Siri has been improved in iOS 12 with Siri Shortcuts, a feature designed to allow let to work with third-party apps, and Siri is also smarter and able to provide info on motorsports, food, and celebrities. Later in the year, Apple will launch a Shortcuts app so you can create your own shortcuts.

dhoughal
Wow, everything is so freaking fast: App start, app switching. Animations are super smooth. And this is early beta!
Score: 5 Votes (Like | Disagree)

gusnyc
I don't see it in my phone. How do I force the update? What is the version number?
Score: 2 Votes (Like | Disagree)

[doublepost=1530819390][/doublepost]So the question is the public beta safe to now install? Just wondering if there is any problems with battery issue or any other issue before I install? Thanks

Installing a beta is always risky, especially an early beta of a major update.

Most people are saying the iOS 12 betas are running quite well with minimal problems. But a fair number of people are having major problems and a few are going back to 11.4.

I'd suggest browsing this thread to see what kinds of issues people are having
https://forums.macrumors.com/threads/ios-12-beta-3-―-bug-fixes-changes-and-improvements.2125961/

and this one to see what apps are known to work well vs. have problems with iOS 12, so far:
https://forums.macrumors.com/threads/-ios-working-broken-and-soso-apps.2121506/

If you dive in, first plug your device into your computer with a cable and do a (preferably encrypted) backup, just in case 12 doesn't work out for you.
Score: 2 Votes (Like | Disagree)

mujtaba.mir
Shortcuts app beta is out too.
Score: 1 Votes (Like | Disagree)

Wow, everything is so freaking fast: App start, app switching. Animations are super smooth. And this is early beta!

Yes, it's "amazing" how stable it is.
Score: 1 Votes (Like | Disagree)
Read All Comments