IHS Markit conducted a new survey in March and April 2018, asking 937 smart speaker owners various questions about the usage of their devices, spreading across the United States, United Kingdom, Japan, Germany, and Brazil. According to the findings that have been shared today, just six percent of smart speaker owners used their speakers to command smart home devices like lights, switches, and thermostats.

The speakers and assistants included in the survey were HomePod/Siri, Google Home/Google Assistant, Microsoft Cortana, Bixby, and Amazon Echo/Alexa. The most popular category for smart speaker control for all speakers was asking about the weather and news, followed in descending order by: basic questions, music controls/discovery, sending a message and making a phone call, video controls/discovery, making a purchase, controlling smart home devices, and lastly a "none of these" category. 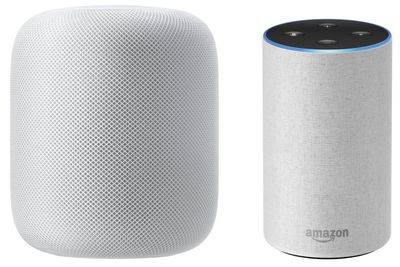 Despite the low usage rates for users interacting with smart home products through their speakers, IHS principal analyst Blake Kozak believes this will change in the near future.

Kozak believes that one area of potential smart home growth will come from insurance companies, who will "play a role" in educating customers about connected devices that could help them in their homes. These include products for water leak detection, flow detectors, and shutoff valves. In total, Kozak predicts more than one million home policies in North America will include at least one connected home device by the end of the year, and 450,000 smart speakers will be connected to insurance companies by that time as well.

In terms of smart assistant usage, Amazon Alexa was the most widely used voice assistant with 40 percent of respondents owning an Alexa device, and 23 percent owning a Google Home device. Siri came in third place, with the most inquiries for Apple's assistant also pertaining to the weather, news, and asking Siri a question.

For HomePod, Apple yesterday launched the smart speaker in Canada, France, and Germany via the Apple online store, Apple Store app, and in its retail locations in each country. HomePod allows users to command Siri to activate or deactivate their personal HomeKit products in the Home app, and represents Apple's first entry in the smart speaker market.

RogerWilco
Home automation products have been available since the 1980s. The latest wrinkle involving web-connected "hubs" adds another layer of complexity, this is progress? Average people are consumers of technology, they don't write programs and they really don't care to program a HA system. Geeks love this HA stuff and wealthy people hire geeks to do the programming -- there's your market in a nutshell -- geeks and the wealthy.
Score: 9 Votes (Like | Disagree)

bbednarz
You either like home automation stuff or you dont. Some friends will come over and think its really cool. Some others scoff at the idea and think its the dumbest thing theyve ever heard. I like tech, I think its cool that I can tell Siri goodnight and she turns off all the lights and turns on the bedroom fan. Once I own I house I can also have her set a certain temperature and lock the doors all with that one command. Its neat, but not necessary. Its not surprising to me that it isnt widely used.

I think the biggest issue is people dont know how to use them and set them up. I set up an echo and a couple of smart plugs for my parents under cabinet lighting. They wouldve never been able to get it set up on their own, but now that they have it they really like the simplicity.
Score: 8 Votes (Like | Disagree)

OldSchoolMacGuy
Most likely because not many have home automation products.
Score: 6 Votes (Like | Disagree)

I'd love to use my Echo Plus to control my smart switches, if only it would connect to them or not forget them for no reason. That'd be ideal

The garden variety light switch has zero latency and 99.9999% command reliability. Compare that to any of the myriad HA protocols and devices where latency is often measured in seconds and 95% is considered acceptable command reliability.
Score: 6 Votes (Like | Disagree)

cliffster82
Talking to gadgets is still really strange to me.
Score: 6 Votes (Like | Disagree)
Read All Comments

Monday September 26, 2022 7:34 am PDT by Sami Fathi
Today marks exactly two weeks since Apple released iOS 16 to the public. Besides the personalized Lock Screen, major changes in Messages, and new features in Maps, the update has also seen its fair share of bugs, performance problems, battery drain, and more. After major iOS updates, it's normal for some users to report having issues with the new update, but such reports usually subside in...
Read Full Article • 181 comments