A long-standing bug in macOS's Quick Look feature has the potential to expose sensitive user files like photo thumbnails and the text of documents, even on encrypted drives, according to security researchers. 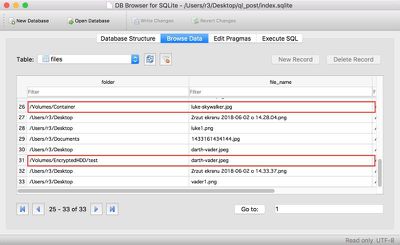 Image via Wojciech Regula
Quick Look in macOS is a convenient Finder feature that's designed to present a zoomed-in view when you press the space bar on a photo or document that's selected.

To provide this preview functionality, Quick Look creates an unencrypted thumbnail database where thumbnails of files are kept, with the database storing file previews from a Mac's storage and any attached USB drives whenever a folder is opened. These thumbnails, which provide previews of content on an encrypted drive, can be accessed by someone with the technical know how and there's no automatic cache clearing that deletes them. As Regula explains:

It means that all photos that you have previewed using space (or Quicklook cached them independently) are stored in that directory as a miniature and its path. They stay there even if you delete these files or if you have previewed them in encrypted HDD or TrueCrypt/VeraCrypt container.

This is an issue that's existed for at least eight years and concerns have been raised about it in the past, but Apple has made no changes in macOS to address it. "The fact that behavior is still present in the latest version of macOS, and (though potentially having serious privacy implications), is not widely known by Mac users, warrants additional discussion," writes Wardle.

As Wardle points out, this information is valuable in law enforcement investigations, but most users are not going to be happy to learn that their Mac records file paths and thumbnails of documents from every storage device that's been attached to it.

For a forensics investigation or surveillance implant, this information could prove invaluable. Imagine having a historic record of the USB devices, files on the devices, and even thumbnails of the files...all stored persistently in an unencrypted database, long after the USB devices have been removed (and perhaps destroyed). For users, the question is: "Do you really want your Mac recording the file paths and 'previews' thumbnails of the files on any/all USB sticks that you've ever inserted into your Mac?" Me thinks not...

It's worth noting that if the main drive on the Mac is encrypted, the Quick Look cache that's created is too. Wardle says that data "may be safe" on a machine that's powered off, but on a Mac that's running, even if encrypted containers are unmounted, the caching feature can reveal their contents.

"In other words, the increased security encrypted containers were thought to provide, may be completely undermined by QuickLook," writes Wardle.

Wardle recommends that users concerned about unencrypted data storage clear the Quick Look cache manually whenever a container is unmounted, with instructions for this available on Wardle's website. It's also worth checking out Wardle's site for full details on the Quick Look bug.

luvbug
It's a one line command (in terminal) to clear the cache. You need to be an "admin" user, but you don't need to be root:

Of course, someone here will figure out a reason to whine about having to do this.
Score: 20 Votes (Like | Disagree)

InuNacho
I’ve known about this for years. I accidently locked a word file and was able to “rescue” it by hitting the space bar.
Great security.
Score: 18 Votes (Like | Disagree)

This is an issue that's existed for at least eight years and concerns have been raised about it ('http://osxdaily.com/2010/07/25/filevault-and-quicklook-leak-some-information-from-encrypted-volumes/') in the past, but Apple has made no changes in macOS to address it. "The fact that behavior is still present in the latest version of macOS, and (though potentially having serious privacy implications), is not widely known by Mac users, warrants additional discussion," writes Wardle.

Apple does not care about the Mac. The hardware and this proves it. You guys should seriously consider naming this site iosrumors.com (that's not a shot at you either.. Apple is all about iOS)
Score: 17 Votes (Like | Disagree)

So, you get the prize for first whiner! I guess assigning blame is more important to you than addressing the problem in the first person using readily available information.

Ordinary people wouldn’t know to input a terminal command, or even know that Quick Look is leaking their data.

The bug lies with Apple’s code. How is this the fault of the consumer? The consumer is certainly not the party to blame in this situation.
Score: 12 Votes (Like | Disagree)

It's a one line command (in terminal) to clear the cache. You need to be an "admin" user, but you don't need to be root:

Of course, someone here will figure out a reason to whine about having to do this.

You shouldn't have to do this because of a bug in the software left in from literally years ago.
Score: 11 Votes (Like | Disagree)

AL1630
Hmm. It seems like these flaws are becoming more common lately. Not sure if that's just me paying more attention or if the amount of flaws is actually increasing.
Score: 8 Votes (Like | Disagree)
Read All Comments