Verizon Wireless was awarded the title of the fastest nationwide mobile network in PCMag's annual mobile network comparison, the results of which were released this morning.

For its test, PCMag analysts drove within and between 30 cities in the United States to test mobile network speeds using four Samsung Galaxy S9 phones. More than a dozen locations in each city were tested, with the site gathering more than 124,000 data points to reach its conclusion. Scores were calculated taking into account metrics like download speed, upload speed, latency, reliability, and consistency. 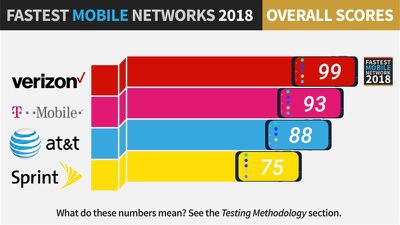 Verizon was named the overall fastest network after it won or tied in 19 of the 36 cities that were tested across the United States, marking Verizon's 5th annual victory.

PCMag says that compared to its 2017 results, it saw faster, more consistent LTE connections across all four major U.S. carriers in the 2018 test. In the future, we should see some interesting results as mobile networks are upgraded to 5G. AT&T and Verizon are both aiming for higher speeds in smaller areas, while T-Mobile is aiming for nationwide 5G coverage but at slower speeds.

In addition to determining the fastest mobile carrier in 2018, PCMag also took a look at Speedtest Intelligence results pulled from Ookla to determine the fastest download speeds on modern Samsung and Apple devices.

Samsung's flagship smartphone, the Galaxy S9, equipped with Gigabit LTE and 4x4 MIMO, beat out the iPhone X, which does not have 4x4 MIMO. Of Apple's iPhones, though, the iPhone X saw the fastest upload and download speeds thanks to its adoption of 256QAM (Quadrature Amplitude Modulation), which boosts signal to allow for more data to be transferred at one time.

The full results of PCMag's 2018 mobile carrier speed testing can be found over on the PCMag website.

iapplelove
And here I am completely satisfied with my 4g LTE AT&T 3rd place speeds lol
Score: 4 Votes (Like | Disagree)

citysnaps
I dunno... For my mobile phone needs (not talking about tethering to a computer), any of the above rates are more than adequate for normal communications/browsing.

I would give other metrics more weight when choosing a carrier.
Score: 3 Votes (Like | Disagree)

snowboarder
I setup my European phone number. I pay $6 (six) per month for unlimited internet/unlimited calls and texts anywhere in Europe. I regularly get 150 MBps download speed on LTE. Pretty incredible how far behind we are...

In the US we pay $120/month for two lines, grandfathered AT&T unlimited iPhone accounts.
Score: 3 Votes (Like | Disagree)

B4U
Sprint shall probably rename themselves as “Crawl”, since “Sprint” is false advertisement.
Score: 2 Votes (Like | Disagree)

2010mini
How do we compare to carriers in other countries?
Score: 2 Votes (Like | Disagree)

MacDawg
Speed is just one component of consideration for me
The most important is coverage and availability
AT&T has been good for me overall and I don't have any speed issues
Score: 2 Votes (Like | Disagree)
Read All Comments