Apple showed off a major new app coming to watchOS 5 later this year, called "Walkie-Talkie." Using the app, Apple Watch wearers will be able to send quick voice messages to friends and family members by speaking into their Apple Watch, similar to real Walkie-Talkies. 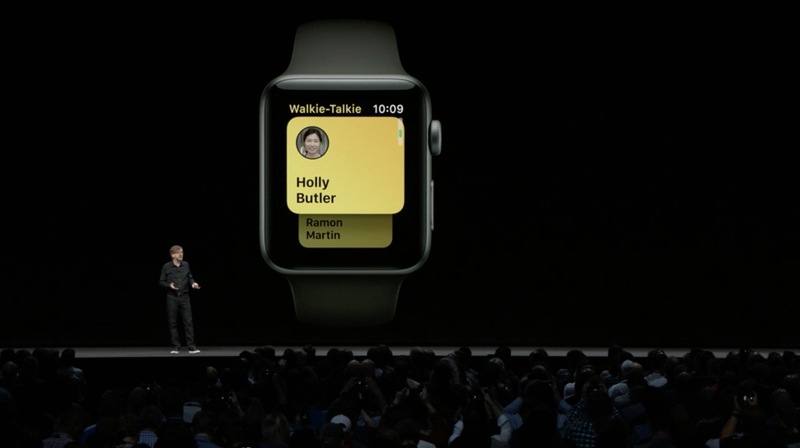 To start using the feature, users will have to allow a connection to one another in the app. After, it will show a scrolling list of connected friends, which you can tap, speak your message, and send to their Apple Watch. Apple said the main purpose of Walkie-Talkie is to act as a middle point between sending a text message and calling someone on Apple Watch.

Additionally, a watch-to-watch connection will work over cellular and Wi-Fi.

newyorksole
This is awesome. Love that they used Nextel Yellow ;)
Rating: 6 Votes

twocents
Only took 4 years. Seems like the new norm for Apple txpilot82
This feature was promised back in 2014.
Rating: 5 Votes

So basically, insta-voice mail without the call. Cuz this ain't like no walkie talkie I ever used.


Did your old walkie talkie fit on your wrist and also track your day and physical activity?
Rating: 2 Votes

Sirious
They announced this as part of watchOS 1 way back when.

Hello everyone, I asked this in another thread but I can’t seem to figure it out. I really like the new Wilkie talkie feature. However, since this is real time messages, is there a wait till later to listen feature? The keynote showed the messages coming right through. That would be a pain when people are at work. Or like when I’m in the middle of teaching a class.

Presumably it will not automatically play unless you have the walkie talkie app open.
Rating: 1 Votes

Relentless Power
To me, this truly was what we envisioned the Apple Watch to be back during the dick Tracy days when he would talk to his watch, now we are to that point. Even though I may not utilize this feature, still fairly interesting.
Rating: 1 Votes

Krayzkat
If only i knew someone else with an AW that i'd want to set this up with! Although, i think this will be great for sending random inappropriate voice messages to people when they least expecting it for maximum embarrassment.
Rating: 1 Votes

ersan191
This is just sending an audio recording clip in imessage without having to click play or send I guess... not exactly revolutionary
Rating: 1 Votes
[ Read All Comments ]