Craig Federighi today announced ARKit 2 at WWDC 2018, which will give developers access to improved face tracking, realistic rendering, 3D object detection, persistent experiences, and shared experiences. The company gave a demo of two users sharing a virtual environment using ARKit 2, playing on a table with wooden toys and trying to knock down the other player's objects.

Apple says that ARKit 2 is a more powerful platform than the original ARKit, since it can allow multiple users to play a game or collaborate on projects together. There is also support for a "spectator mode" so that friends and family can see AR gameplay from another iOS device without participating. 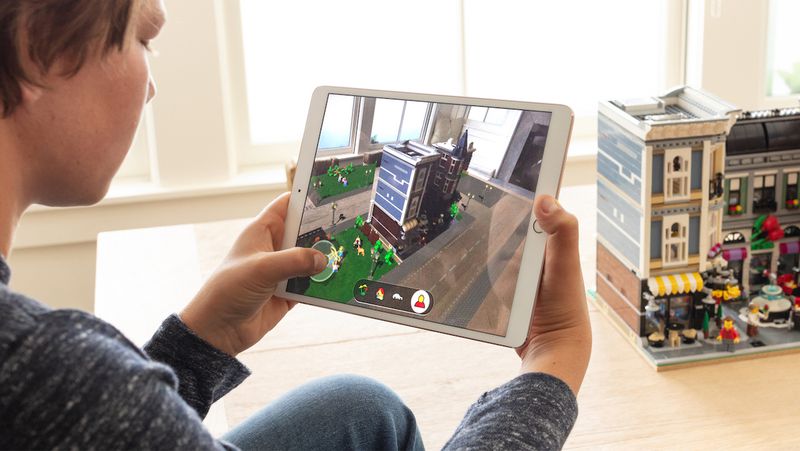 With "persistent AR," you'll be able to leave virtual objects in the real world and come back to them later. For example, you can start a puzzle on a table and come back to it another day and discover it in the same state that you left it.

ARKit 2 also extends support for image detection and tracking, making it possible to detect 3D objects like toys or sculptures, and adds the ability to automatically apply reflections of the real world onto AR objects. This makes the AR experience an even more realistic mix of the virtual and real world.

One of the notable demos at WWDC this year saw Apple bring Martin Sanders, Director of Innovation at LEGO, on stage to demonstrate a new LEGO AR iOS app that will integrate with ARKit 2 features and connect to physical LEGO sets. An entire LEGO city was shown off in the demo, allowing users to build objects, place characters, go on quests, open sets to see inside, and play with friends in the same world.

Up to four friends can play in the same set on four different iOS devices, and notably all of the virtual aspects of the LEGO AR app will be connected to physical LEGO sets. "We can save our entire world back into our physical set, and pick up where we left off later," Sanders said.

In other augmented reality news, Apple has created its own measuring app called "Measure," which can provide the dimensions of objects automatically. The company also collaborated with Pixar to create a new open file format called usdz, which enables AR experiences in many apps, like Messages and Mail.

All of these advanced ARKit 2 features will be available when iOS 12 launches this fall.

Is it just me or was the physical part of that Lego game completely useless?