Drone videographers Duncan Sinfield and Matthew Roberts each uploaded new videos to their YouTube channels over the past day, covering the latest views of Apple Park from the sky. The videos come a few hours ahead of Apple's Worldwide Developers Conference, which is happening about 8 miles to the east of Apple Park at the McEnery Convention Center in San Jose. 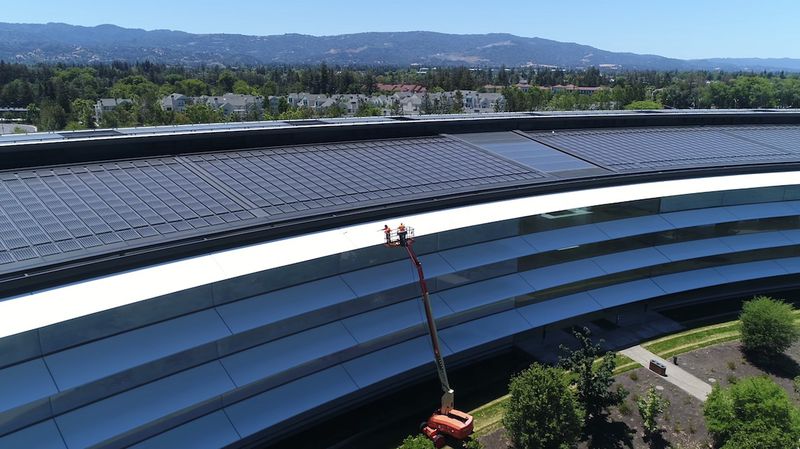 Image via Matthew Roberts/Maverick Imagery
In Cupertino, the company's ringed campus "continues to evolve," according to Sinfield. For June 2018, this means that around 9,000 trees have now been permanently planted around the campus, employees are continuing to relocate onto the site "every week," and cleaning crews are working twenty-four hours a day to maintain the central spaceship building and the structures surrounding it, "including washing the window shades at least once per week."

At around the two minute mark in his video, Sinfield spots a few Apple Park workers doing just that.


Roberts also catches a few workers cleaning the window shades in the central courtyard of the spaceship building, pointing out that he has seen "notable changes" in the "amount of detail paid to keeping the spaceship clean" and in the expansion of greenery around the campus. Otherwise, Roberts catches nice glimpses into Apple Park's main atrium, the employees' outdoor activity area with basketball courts, and the stairs that lead down into the underground portion of the Steve Jobs Theater.
Drone video updates from videographers like Sinfield and Roberts have become slightly less frequent as Apple Park finally ends construction after beginning just over four years ago in December 2013. Additionally, in April 2018 Sinfield said that it has become increasingly difficult to fly his drones over the campus due to increased security, believing it's "only a matter of time until the campus becomes shut-off to drones completely."

In the summer of 2017, multiple reports emerged about Apple Park security's first efforts at stopping drone pilots from accessing the airspace above the campus. Despite those attempts, drone update videos kept being uploaded to YouTube by multiple videographers, mainly including Sinfield and Roberts. Apple's renewed anti-drone efforts in the spring of 2018 appear to have been a bit more strict, however, and followed a leaked memo from the company that warned employees against leaking details about future devices to the media.

theheadguy
Today is not a slow news day, so I would have saved the increased frequency of window shade cleaning story for another day lol.
Score: 12 Votes (Like | Disagree)

Mike MA
Workers cleaning window shades? Finally, the leak we were all waiting for ahead of WWDC :)
Score: 5 Votes (Like | Disagree)

macduke
Yeah, we can probably just stop it with the Apple Park drone videos at this point.
Score: 5 Votes (Like | Disagree)

b0nd18t
Wow how many blades of grass were added? Any steaks left on the windows shades? Is there any paint drying we can look into further?
Score: 2 Votes (Like | Disagree)

jonnysods
How about a drone with a high pressure hose? The spies could collaborate with the cleaners.

I wonder what the executive offices look like there. Must be pretty nice!
Score: 1 Votes (Like | Disagree)
Read All Comments