Apple's widely rumored trio of new iPhone models expected to be announced in September will feature 18-watt USB-C power adapters in the box for much faster wired charging, according to ChargerLab. 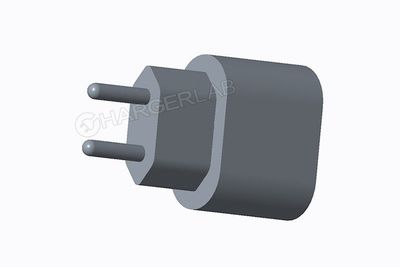 ChargerLab's render of European version of Apple's rumored 18W USB-C charger
The new, rounder-shaped power adapter would connect to an iPhone with a Lightning to USB-C cable, also expected to be included in the box, enabling much faster charging speeds than the tiny square-shaped 5W power adapter included with current iPhones. A render of the European version is shown above.

Today's report, based on information from "inside the production line," corroborates a post on Chinese social network Weibo that also claimed 2018 iPhones will come with an 18W USB-C charger and a Lightning to USB-C cable in the box. That report included drawings of what the North American charger may look like.

All in all, the new 18W power adapter would generally charge an iPhone at least twice as fast as the current 5W charger. Fast charging is supported by the iPhone 8, iPhone 8 Plus, iPhone X, and presumably future models, rumored to include a new iPhone X, a larger iPhone X Plus, and a lower-priced 6.1-inch iPhone.

d5aqoëp
They better have the fastest charger available included. This penny pinching and converting the buying process into RPG game was getting ridiculous.
Score: 12 Votes (Like | Disagree)

enmanuelrrr
Finally! I think Apple should have included the fast charger and a Lightning to USB-C cable with the iPhone 8, 8 Plus and X.
Score: 11 Votes (Like | Disagree)

Honestly, who cares? Until they implement USB-C, Apple's decisions are irrelevant and a joke.

As you can tell from the replies, a lot of people care.

You cry and whine about literally everything. If they offered USB-C phones, you'd be whining that your existing peripherals don't work.
Score: 10 Votes (Like | Disagree)

bladerunner2000
Honestly, who cares? Until they implement USB-C, Apple's decisions are irrelevant and a joke.
Score: 8 Votes (Like | Disagree)

jmarttu24
I wouldn't be surprised if they offer it separately for 3 easy payments of $79.99
Score: 8 Votes (Like | Disagree)
Read All Comments