The iPad Pro and the iPhone X were today named Displays of the Year by The Society for Information Display (SID) during the annual Display Industry Awards that will take place at Display Week, a yearly symposium and trade show.

The display awards are meant to highlight "high-quality, innovative work that is taking place in the display industry." All 2018 award winners cover products that were available for purchase during the 2017 calendar year. 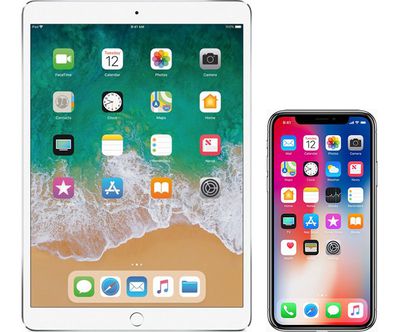 Apple's 10.5 and 12.9-inch iPad Pro models, released in June of 2017, won an award for the ProMotion display technology introduced in the two devices. ProMotion introduces a 120Hz display refresh rate, which is designed to make all motion content on the screen smoother, crisper, and more responsive. It improves text, scrolling, gaming, Apple Pencil latency, movies, and more.

The 10.5 and 12.9-inch iPad Pro models feature a 2224 x 1168 and 2732 x 2048 resolution, respectively, with a pixel density of 264 pixels per inch. The two devices also include support for True Tone, which adjusts the white balance of the display to match the ambient lighting in a room, and P3 wide color gamut for more vivid, true-to-life colors.

Apple's iPhone X was also given a Displays of the Year award for its edge-to-edge Super Retina display that's entirely screen (aside from the notch) with no physical buttons. It offers the first OLED display in an iPhone, with support for HDR and True Tone.

The 5.8-in. Super Retina display features resolution of 458 ppi and is the first OLED panel to match the standard set by prior iPhone generations, delivering striking colors, true blacks, a million-to-one contrast ratio and superior, system-wide color management. The HDR display supports Dolby Vision and HDR10, which together serve to further heighten the image quality of photo and video content. In addition, True Tone dynamically adjusts the white balance of the display to match surrounding light for a more natural, paper-like viewing experience.

Other non-Apple devices won awards, too, including the Sharp 70-inch 8K LCD TV and new technologies that include Continental Automotive's 3D Touch surface (the first touchscreen with a 3D surface on top of a display), Colorless Polyimide from Kolon Industries (for creating flexible displays), the Optical In-Display Fingerprint Sensor from Synaptics (for infinity displays with no visible Home button), and the LG UHD Crystal Sound OLED (an OLED panel-integrated speaker).

All of the Displays of the Year award winners will be recognized during the Display Week awards luncheon, set to take place at the Los Angeles Convention Center on Wednesday, May 23.

Literally no one forgets that because it's discussed ad nauseam. What people forget is that Apple's Samsung screen is better than Samsung's Samsung screen.
Score: 32 Votes (Like | Disagree)

DNichter
Best of the best right there
Score: 16 Votes (Like | Disagree)

So calibration of the year?
Score: 15 Votes (Like | Disagree)

tarsins
Those of us who have these products already knew this. Their respective screens are gorgeous.
Score: 13 Votes (Like | Disagree)

JackieTreehorn
Agree with that. To this day, I am still amazed almost every day by the quality of my iPad Pros and iPhone X.....
Score: 11 Votes (Like | Disagree)
Read All Comments