Wednesday April 11, 2018 4:26 pm PDT by Juli Clover
Amid a continuing decline in worldwide PC shipments, Apple's Mac sales have remained steady in the first quarter of 2018, according to new PC shipping estimates shared this afternoon by Gartner.

Apple shipped an estimated 4.26 million Macs during the first quarter of 2018, up from 4.2 million Macs in the year-ago quarter, marking 1.5 percent growth.

The overall worldwide PC market, however, declined 1.4 percent year over year. In total, there were an estimated 61.7 million PC shipments during the quarter, down from 62.6 million in the year-ago quarter and the 14th consecutive quarter of decline.

Apple saw less growth in the United States. During Q1 2018, Apple shipped an estimated 1.49 million Macs, a 0.5 percent increase from the 1.48 million Macs it shipped in the year-ago quarter. Apple was also ranked the number four PC vendor in the U.S., trailing behind Dell, HP, and Lenovo. 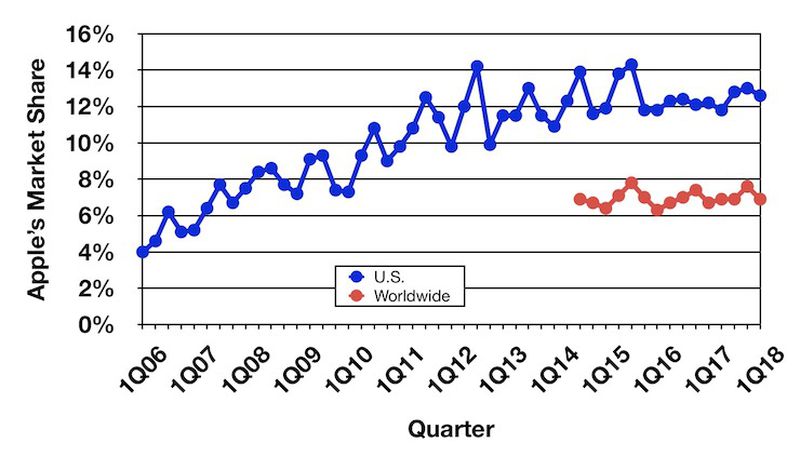 IDC also released its own shipment estimates this afternoon, and as is often the case, IDC's shipping estimates are quite a bit different from Gartner's. IDC and Gartner's data often varies due to the different ways each firm makes its shipment calculations.

IDC says Apple was the number five worldwide PC vendor with just 4 million Macs shipped, a 4.8 percent decline from the 4.2 million shipped in the year-ago quarter. While Gartner ranks Apple above Acer, IDC does not.

It's important to note that data from Gartner and IDC is preliminary and the numbers can shift, sometimes dramatically and sometimes less so. Last year, for example, Gartner estimated shipments of 4.217 million Macs in Q1 2017, while the actual number was 4.199 million.

It's been several months since Apple last refreshed the bulk of its Mac lineup, with the exception of the iMac Pro, so it's not surprising to see little growth in shipments. Apple is expected to introduce refreshed MacBook, MacBook Pro, and iMac models at some point this year, perhaps at the Worldwide Developers Conference in June.

bladerunner2000
Imagine the sales if they had a good computer to sell.... hoo boy!
Rating: 25 Votes

Image the sales if they had a good computer to sell.... hoo boy!

Yeah, their performance for $2000 laptops is just ridiculous.


Seriously wishing Apple would stop chasing stupid thinness and touchbar gimmicks and would actually make something that doesn't run 2012 components in 2018.
Rating: 17 Votes

Williesleg
Do those numbers include servers? Because I'll tell you, there are a lot of servers being sold this year. And Apple's share is zero. Such a shame.
Rating: 12 Votes

npmacuser5
Imagine how good sales of MacOS systems would be if they did not try and push everyone to the iPad, including Education. ;)
Rating: 9 Votes

The server market is one I can understand Apple abandoning. Pricing is cut-throat, most things standardised and nobody cares particularly what they look like. Money is made from OS licensing but Apple typically doesn’t charge (much) for that.

Add to that hardly anyone would use OS X server except a few specialised or academic institutions maybe and with Apple’s help or special undisclosed deals required to sweeten the deal.

Home servers are a different thing but even they aren’t really advisable for most compared with online services these days. More trouble that they’re worth. The occasional tinkerer or dedicated privacy enthusiast isn’t enough to justify even a server Mac Mini configuration.

Servers have such specific and limited use. Set and forget is the aim.

More servers are sold than PC's by dollar value.

Have a friend who worked at Dell. Servers margins are 80 points.

Only reason Apple abandoned his market is they were terrible at it and selling almost nothing.

Same reason they don't out much effort into laptops and desktops anymore.

They know their wheelhouse is emoji phones and overpriced dongles.
Rating: 7 Votes

Not substantially higher. The majority of the consumer, education market has moved from traditional computers to tablets and mobiles. Its 2018, not 2008.

Beg to differ, 60% of Education using ChromeOS. That would be laptops.
Rating: 5 Votes

What are you talking about? The iMac Pro is great computer and it's only $4,999.

I wonder if anyone at Apple really cares about that kind of embarrassing product.
Rating: 4 Votes

nvmls
As long as dongles sold keep raising to their eyes it's a success.
Rating: 3 Votes

Image the sales if they had a good computer to sell.... hoo boy!