iFixit today published its teardown of Apple's sixth-generation, education-focused iPad and found that -- unsurprisingly -- the tablet shares many of the internals of the fifth-gen iPad. The teardown crew also looked at the new iPad's potential for durability and repairability in an education environment by comparing it to competitors in the field. 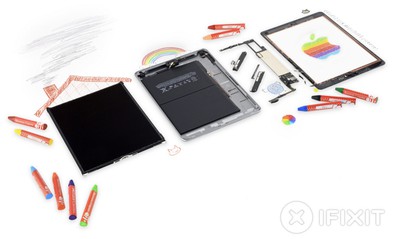 Images via iFixit
The new iPad's lack of waterproofing, non-replaceable charging port, zero upgradeability, and use of glue throughout the internals added up to a "repair nightmare." iFixit then pointed towards the HP Elite x2 1012 G1 tablet, which got a perfect repairability score of 10 out of 10, summarizing that "Apple's 'education' iPad is still a case of won't — not can't."

Looking into the iPad's internals, the two major updates in the new tablet are an upgraded A10 processor and Broadcom chips for Apple Pencil support. iFixit got a peek inside the iPad using Creative Electron's X-ray imaging software, discovering "only minor differences" when compared to a similar X-ray of the previous iPad.

One of the iPad's advantages in terms of repairability comes in the form of its digitizer panel easily separating from the display. iFixit pointed out that in the event that either component should break, repair will be easier for schools and educators.

In the education space, Apple has some stiff competition in the form of low-cost, Google-powered laptops. How does this iPad, er, stack up against a Chromebook from HP or Asus? Given that schoolkids can be a bit rough on their electronics, here's an iFixit take on it:

iPad's glued-glass display is more vulnerable to drops. Thankfully, this is the one iPad that retains an air-gapped digitizer panel—not as visually impressive as other recent iPads, but it's much cheaper to replace cracked glass that isn't LOCA-bonded to the display panel underneath. Separate accessories like the keyboard and Pencil add to the cost and are easier to lose—but are also easier to replace if damaged. (Note the missing key on our HP's keyboard.)

Eventually, iFixit got down to the logic board and discovered the iPad's A10 Fusion processor and two Broadcom touch screen controller chips, previously found in the 10.5-inch and 12.9-inch iPad Pro models. iFixit theorized that the new iPad's Apple Pencil support "comes in part thanks to this "Pro"-grade chip."


The sixth-gen iPad has the same battery as the previous model, with 32.9 Wh capacity. iFixit noted that while this allows Apple to reuse existing manufacturing lines to reduce waste, the battery is still locked behind a "repair-impeding adhesive" that greatly reduced the iPad's repairability score. Apple has provided easy battery removal before, in the 12.9-inch iPad Pro, but iFixit hasn't seen anything like it since.

Ultimately, iFixit gave the 2018 iPad a repairability score of 2 out of 10, favoring the fairly easy repair options of its air-gapped, non-fused display and digitizer glass, but taking marks off for its heavy use of adhesive and sticky tape. To read the full teardown, visit iFixit.com.

mtneer
While I have no bone with the claims, what iPad has ever been "repairable"? I can't think of anything out of Apple's stables in the past decade that has been highly repairable. On the other end, how many Chromebooks are repairable, even if they are, why not just replace them since shop time and costs to repair a Chromebook may get close to a new one.
Score: 25 Votes (Like | Disagree)

Oh, there are plenty of stories believe me. I've dealt with enough.

fixit is just on another one of its let’s get some clicks anti-Apple rants.

What for reporting the truth on how repairable these things are?
Score: 18 Votes (Like | Disagree)

Rogifan
News flash to ifixit, this is just an update to the consumer iPad with a slight discount to schools. Somehow schools are using iPads now without stories of durability issues. ifixit is just on another one of its let’s get some clicks anti-Apple rants.
Score: 13 Votes (Like | Disagree)

Xenomorph
When my daughter got a Chromebook at her school, I went out and bought the same model for myself - Acer C740.

I read that (compared to the C720) the C740 model was more aimed at the "educational" market, and so had things like more durable hinges, thicker plastic, etc. It was designed to survive falls and abuse.

Besides all that, I fount the thing dead-simple to work on. The top pops apart, held together by plastic clips. I was easily able to replace the basic TN display with a vivid IPS display. The bottom is held together by a few screws. You can easily remove it and service the insides. The internals are user replaceable, such as the SSD (M.2), the fan, logic board, and battery. In fact, I yanked its original SSD and slapped in a 256 GB one.

They are so user-serviceable that they actually have the students themselves provide repairs. They take broken systems to a room where the kids salvage parts from them to repair and rebuild other damaged systems brought in.

* durable *and* easy-to-repair hardware, with a "clamshell" design that protects its display.
* a built-in pointing device and full keyboard.
* a full "Desktop" experience browser, with support for plugins and Flash.
* something that can easily sit on a desk and be used, without someone needing to constantly hold it.
* a locked-down, secure, automatic-updating OS with a seamless and quick "A/B" update system (iOS doesn't even have that).

In contrast, for a higher price, Apple is offering something that:

* must be held at all times to be used
* is much, much easier to be broken/damaged
* is much, much harder to work on or repair (students can't do it, teachers can't do it, it must be sent off)
* includes no keyboard or pointing device. each requires a separate purchase on top of the already-higher base price.
* has a relatively lengthy update process and cannot be used during

I don't think the newest "iPad for Education!" thing they are attempting will be enough to fight off Chromebook.
Score: 12 Votes (Like | Disagree)

They do this with every Apple product. Because they have an agenda. The harder it is for users to repair their own stuff the fewer repair kits iFixit sells.

An agenda? They do this with literally every tech product for the purpose of helping people to fix stuff.....

I guess Apple has an Agenda as well... make their products less repairable and upgradable = more sales (and more environmental damage)

If the screen breaks it can be repaired, and the battery will last 5 years. What else needs to be repaired? Repairabilty is almost a liability these days.

The batteries do not always last 5 years...
Score: 12 Votes (Like | Disagree)

While I have no bone with the claims, what iPad has ever been "repairable"? I can't think of anything out of Apple's stables in the past decade that has been highly repairable. On the other end, how many Chromebooks are repairable, even if they are, why not just replace them since shop time and costs to repair a Chromebook may get close to a new one.

Unrelated but curious. You bring up Chromebooks, question if they're as repairable, and then go on to suggest buying a new one instead of repairing it. Are we witnessing you have a conversation with yourself?:p:D
Score: 8 Votes (Like | Disagree)
Read All Comments

Wednesday July 1, 2020 3:40 am PDT by Tim Hardwick
As expected, Apple's first MacBook Pro with a Retina display is now officially classed as "obsolete" worldwide, just over eight years after its release. In a support document, Apple notes that obsolete products are no longer eligible for hardware service, with "no exceptions." This means that any mid-2012 Retina MacBook Pro 15-inch models still out there that require a battery or other...
Read Full Article • 169 comments

Tuesday June 30, 2020 11:44 am PDT by Juli Clover
There's a new 'EvilQuest' Mac ransomware variant that's spreading through pirated Mac apps, according to a new report shared today by Malwarebytes. The new ransomware was found in pirated download for the Little Snitch app found on a Russian forum. Right from the point of download, it was clear that something was wrong with the illicit version of Little Snitch, as it had a generic installer...
Read Full Article • 125 comments