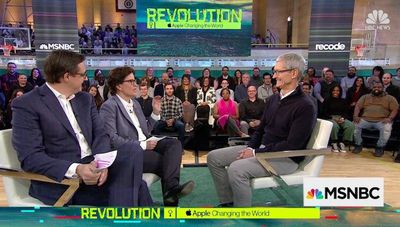 The full interview will be part of a TV special titled Revolution: Apple Changing the World that will air Friday, April 6 at 5:00 p.m. Eastern Time on MSNBC. However, reporters in attendance have shared highlights from the discussion on Twitter.

Cook started by sharing his view that "education is the great equalizer of people." He said "if you look at many of the issues in society today, you can find the root in people who don't have access to quality education today."

"We all have to get comfortable with notion that education is lifelong. Jobs will be cannibalized over time and replaced by others."

While he believes that technology plays a key role in modern education, Cook noted that Apple doesn't believe technology can replace teachers. "Our products are tools," he said. "They help people — not replace people."

"Teachers want to have technology to deliver their lessons. Most all teachers want a level of coding for their classes," said Cook.

On the subject of Apple's new entry-level iPad, $299 with education pricing, Cook said that price point becomes "a very reasonable expenditure" since students, teachers, and school districts "don't have to buy a new iPad every year."

"I want America to be strong, first and foremost. And one base for that is that everyone needs to learn to code. Coding is a way to express yourself. It's a language," said Cook. "It's not our expectation that everyone becomes a software programmer. But it's important that people learn the basics," he added.

"We need to get more people interested in coding. We have to reach out to women and unrepresented minorities that have been too low in coding."

"We know that Apple could only have been created in the United States," proclaimed Cook. "This company would not have flourished in any other country in the world. This is our country and we want to create as many jobs as we can in the United States. We don't need any political pressure for that."

While the iPhone is assembled in Asia, Cook said that many parts are manufactured in the United States, like the display glass from Corning in Kentucky.

On the subject of job retraining, Cook said "we should not all sit around waiting for government to tell us what to do." He added that "this should be something that government and business are working together on."

Cook emphasized the importance of lifelong education and job retraining given that robots will replace humans for certain tasks. "There's an element of what each of us do, which will be automated over time. That's not bad. But we need to think about training for the jobs for tomorrow, which will be software-based."

"The DACA situation is one that I am personally, as an American, deeply offended by," said Cook, referring to the Deferred Action for Childhood Arrivals policy that ended March 5, but is currently upheld by the Supreme Court. "The DACA situation is not an immigration issue. It's a moral issue."

"I don't see this as a partisan issue. This is about America—it's that simple. I am very disappointed with both parties … I'm personally lobbying Congress."

Earlier this month, The Guardian revealed that data firm Cambridge Analytica amassed data on 50 million Facebook users without their consent and targeted messages to voters during the 2016 U.S. presidential election. Cook, who previously called the situation "dire," expanded on his thoughts about the matter today.

"What would I do? I wouldn't be in this situation," said Cook, responding to a question about what he would do if he were Facebook CEO Mark Zuckerberg.

"The truth is, we could make a ton of money if the customer was our product," as is arguably the case for companies like Facebook and Google. "We've elected not to do that," said Cook, touting Apple's privacy measures.

Cook thinks it's "creepy" when he looks at something and it "chases him all the way across the web," like targeted ads. "We're not going to traffic in your personal life. I think it is an invasion of privacy. Privacy to us is a human right. It's a civil liberty and it's something that is unique to America."

In terms of how users can protect their privacy, Cook said the only way to protect data is to encrypt it. "If I were you, I wouldn't do business with a company that isn't doing that," he said. "I would make sure I understood the privacy policy of every app and every website you frequent. I would go into private browsing mode. I would think about blocking cookies."

On the subject of Apple's planned new campus somewhere in the United States, Cook said "we're not doing a beauty contest thing—that's not Apple," which appears to be a slight dig at Amazon's HQ2 search. "It sets up a win lose situation and that's not something I want Apple to be a part of," he explained.

We'll have more coverage of Cook's interview when Revolution: Apple Changing the World airs on MSNBC next Friday.

This guy is clueless when it comes to tech but constantly wants to be in front of the camera to spin his political agendas.

Hardly clueless; in fact far from it.

And because he is CEO of one of the largest corporations in the world which makes products for millions of people around the world, news organizations want to interview him. Nothing wrong with that.
Score: 16 Votes (Like | Disagree)

mi7chy
This guy is clueless when it comes to tech but constantly wants to be in front of the camera to spin his political agendas.
Score: 13 Votes (Like | Disagree)

jimothyGator
DACA may be a moral issue, but it's also an immigration issue. To claim otherwise is absurd, regardless of where you stand on the issue.
Score: 11 Votes (Like | Disagree)

alex2792
How is DACA not an immigration issue?
Score: 8 Votes (Like | Disagree)

How much are you worth?

Worth is more than money. You’ll realize that one day.
Score: 8 Votes (Like | Disagree)

How is DACA not an immigration issue?

Because they know they are here illegally and that is the only way they can spin it.
Score: 6 Votes (Like | Disagree)
Read All Comments