Quick Takes: Spotify for Apple Watch and StreamKit for watchOS 5 to Debut at WWDC 2018?

1. Spotify for Apple Watch to debut at WWDC? An anonymous and unverified tipster has informed MacRumors that Spotify will unveil an official Apple Watch app at WWDC 2018 in June, based on personal involvement with the project. 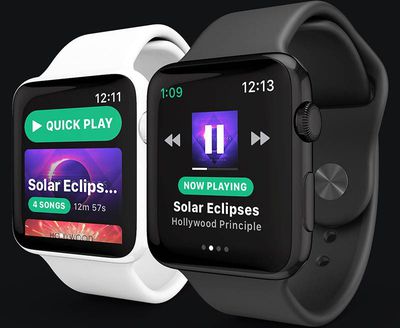 Third-party Spotify app Snowy, which was never released, as its developer Andrew Chang was hired by Spotify to help build their official Apple Watch app
The app will supposedly be a lead example of Apple's tentatively named StreamKit framework that will enable cellular Apple Watch models to receive push notifications from third-party apps like Facebook and Twitter, completely independent from a paired iPhone, on watchOS 5.

2. Are corporations that use Wikipedia giving back? Wikimedia's revenue chief Lisa Gruwell expresses some concerns about seemingly one-sided relationships with companies that utilize its information.

"I don't mean to sound like the Lorax here," said Gruwell. "If you overuse something and you don’t give back to it, you can harm it. In the case of Alexa and Siri, our content gets intermediated. Wikipedia works because people can contribute to it, people can edit it. Also, once a year, when we ask people can donate. When they get their information not from us — but Wikipedia content through something like Siri or something like Alexa — that opportunity to either contribute back as an editor is broken, and that opportunity to contribute, to donate is also broken."

Gruwell said Wikimedia's relationship with Google is by far the best, both in terms of how much they contribute to the organization—more than $1 million in the 2017 fiscal year—and how the companies work together.

By comparison, Apple, Facebook, and Microsoft all contributed around $50,000 through their employee donation matching programs, while Amazon wasn't named on Wikimedia's list of donors in 2017 whatsoever.

An illustration of the size difference between traditional LEDs and Micro-LEDs via CNET
3. MicroLED is the first new screen tech in a decade. Can it beat OLED? CNET's Geoffrey Morrison provides a detailed explanation of the advantages and technology behind microLED displays. Apple is reportedly developing its own microLED displays, but we're likely at least a few years away from seeing them in an Apple Watch or iPhone.

appleguy123
Spotify for Apple Watch being debuted at WWDC would be one of the biggest Apple news stories in years. Not sure why it’s being forced into a recap like this.
Score: 16 Votes (Like | Disagree)

cambookpro
As much as I'd love to personally see a Spotify watchOS app, I can't see Apple actively promoting the closest competitor to Apple Music at their own event.
Score: 6 Votes (Like | Disagree)

Oh right. The watch does apps. I almost forgot cuz it’s so SLOW

Perhaps for the first generation Apple Watch, but for Series 3, there’s hardly anything slow on that Apple Watch with the faster dual core processor.
Score: 5 Votes (Like | Disagree)

adamneer
I'm going to be so pissed if Spotify puts out an Apple Watch app before an Apple TV app. And I own both.
Score: 4 Votes (Like | Disagree)
Read All Comments