Apple has confirmed it will fix a privacy issue in which Siri can read aloud hidden lock screen notifications from many apps on iPhones. 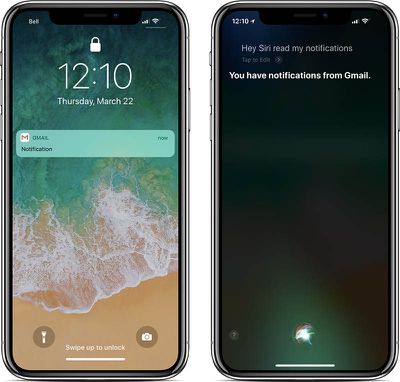 In a statement provided to MacRumors, Apple said "we are aware of the issue and it will be addressed in an upcoming software update." It's quite possible the fix will be included in iOS 11.3, which remains in beta testing, but Apple may elect to address the problem with a minor update such as iOS 11.2.7.

As reported by Brazilian website MacMagazine earlier this week, users can simply ask Siri to "read my notifications" and the assistant will read aloud the contents of notifications, including ones that are hidden, from a wide selection of apps.

Siri's behavior becomes a privacy issue because it can read aloud messages and emails from third-party apps such as Facebook Messenger, WhatsApp, and Gmail, even if an iPhone is locked and notifications are hidden. This violates the trust of users who expect that their notifications cannot be read by others.

MacRumors has reproduced this issue on an iPhone X running both iOS 11.2.6 and the latest iOS 11.3 beta, but we can confirm that it does not affect iMessage. However, the issue did partially affect Apple's stock Mail app, as Siri was able to read the subject line of an email we sent as part of our testing.

There are two workarounds that users can implement until the fix is released to prevent Siri from reading aloud notifications from the lock screen:

MacRumors will update this article as soon as the software update with a fix is released.

WilliamG
I really hope iOS 12 is just iOS 11 without the ridiculous number of bugs.
Score: 14 Votes (Like | Disagree)

spiddyman007
the only thing siri is useful for is to bypass security
Score: 10 Votes (Like | Disagree)

TheShadowKnows!
"Fully disable Siri whenever the iPhone is locked."

applerocks
HOW did they miss this? Cmon!!!!!! And HOW did no one else catch this until now? This isn't an edge case... this is tablestakes!!
Score: 6 Votes (Like | Disagree)

techno-Zen
How did this even pass testing?
Score: 5 Votes (Like | Disagree)
Read All Comments