Invite-Only Game Fortnite Has Earned an Estimated $1.5M Since Launch

Fortnite has topped the iPhone download charts in more than 40 countries since it was released, despite the fact that it continues to be invite only. As of now, it is the number one free app in the Games section of the App Store. 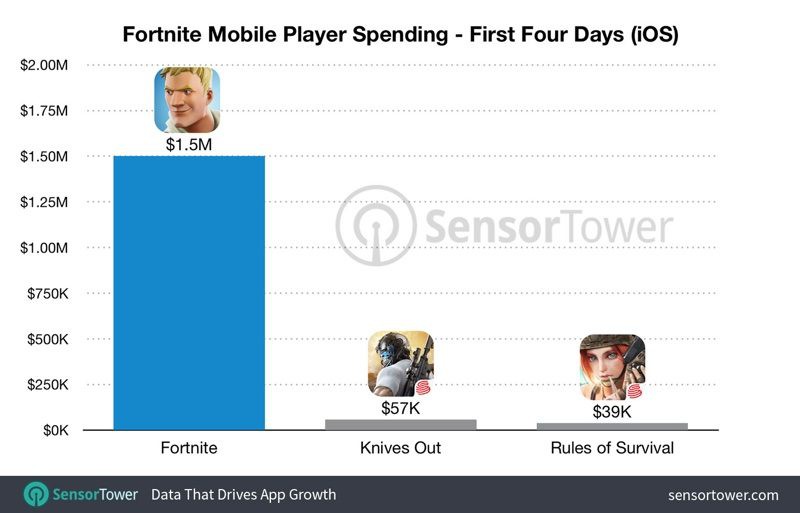 According to Sensor Tower, Fortnite earned $1 million during the first 72 hours after in-app purchases first became live in the game for beta testers.

In Fortnite, players can buy outfits, tools, weapons, emotes, gliders, and more using the in-game currency, V-Bucks. Players can purchase 1,000 V-Bucks for $9.99, which is the minimum in-app purchase. Higher quantities of V-Bucks are available for more money.

Fortnite earned far more than other survival-style games that were released at the same time. Knives Out, a competing game, earned $57k, while Rules of Survival earned $39k. Fortnite could have some competition now, however, as Tencent today released the official version of PUBG Mobile, which offers the same kind of gameplay available in Fortnite.


Compared to other popular games, Fortnite hasn't brought in quite as much money, but it is still in a beta testing phase. Pokémon GO brought in $4.9 million just four days after release, and Clash Royale earned $4.6 million four days after it was released.

The goal in Fortnite is to be the last person standing, with players tasked with killing opponents using a variety of weapons while also avoiding death from other players. The game is also available on PCs and consoles, with cross-platform gameplay available if enabled.

Fortnite can be downloaded from the App Store for free, but a beta invite is required to play. Epic Games plans to expand the beta in the weeks to come, but it's not yet clear when it will see an official launch. [Direct Link]

stan1028
Here I am still waiting for the invite since last weekend. How long does it normally take?
Score: 3 Votes (Like | Disagree)

PS: Can someone spare an invite? Thanks!
Score: 1 Votes (Like | Disagree)

Ballis
Invite only? Im playing on PS4 with no invite at all. Whats this invite thing?
Score: 1 Votes (Like | Disagree)

Invite only? Im playing on PS4 with no invite at all. Whats this invite thing?

Invites are for the iOS version.
Score: 1 Votes (Like | Disagree)

Statusnone88
Love this game on Xbox. Controls on touchscreen are just wayyyyy too difficult to master. Bring controller support and we’re in business!
Score: 1 Votes (Like | Disagree)
Read All Comments