Apple celebrating International Women's Day and Women's Week with in-store events: Apple Orchard Road in Singapore will be hosting Today at Apple sessions over the next week in celebration of women who inspire the community. Apple Marché Saint-Germain in France will be hosting a recruiting event on March 8, billed as an evening of inspiration, participation, and celebration. 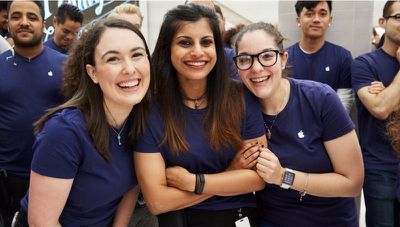 Commentary: International Women's Day is observed on March 8 to celebrate the social, economic, cultural, and political achievements of women. Apple has honored the day in previous years with featured content in iTunes and Apple Music.

Commentary: While beauty is in the eye of the beholder, it's hard not to drool over the idea of a more systemwide dark mode and iTunes being easier to navigate. macOS last received a major redesign as part of OS X Yosemite in 2014.

"Apple Is Going to Be the First Trillion-Dollar Company": A bold headline from Bloomberg View columnist Barry Ritholtz, who believes Apple will achieve the milestone at some point this year. He considers share repurchases, continued investments from Warren Buffett, index buyers, and several new products being on the horizon as four factors key to Apple's continued upward momentum.

Commentary: Apple is certainly leading the race to a trillion dollar valuation, with a market capitalization hovering around the $900 billion mark. Google parent company Alphabet, Amazon, and Microsoft are next closest, each with market caps approaching the $750 billion mark. AAPL is down nearly two percent today.

Apple outlines release process for Swift 4.2, introduces SwiftNIO: Apple has shared a blog post that describes the goals, release process, and estimated schedule for Swift 4.2. Apple has also introduced SwiftNIO at a conference in Tokyo, described as a low-level tool for building high-performance networking applications in Swift.

Commentary: A couple of notable items for developers who use Apple's open source programming language. Today is also the cutoff date for proposing ideas for Swift 5.0, expected to be released in late 2018.

pier
Removing the system bar on macOS would be a huge usability mistake.
Score: 20 Votes (Like | Disagree)

jgbr
He’s obviously not an OS X power user. Hiding the menu bar would be a stupid mistake.
Score: 13 Votes (Like | Disagree)

apb89
Why is the woman in the middle pictured wearing a fitbit? LOL gtfo fitbit
Score: 10 Votes (Like | Disagree)

Removing the system bar on macOS would be a huge usability mistake.

He’s obviously not an OS X power user. Hiding the menu bar would be a stupid mistake.

Yes, he does not understand some of the basic reasons *why* the Mac menu bar is better than operating systems that attach the menu bar to individual windows. On a Mac, you just slam your mouse to the top of the screen and you can quickly get to the menu that you want. In that macOS 11 mockup, the menubar becomes a difficult-to-use widget separate from the geographic dimensions of the screen.
Score: 9 Votes (Like | Disagree)

DocMultimedia
I'm still pissed about the sidebar icons going grayscale. It used to be so much easier to pick things out. Now it's little icons that all look about the same. Downloads, Music, Dropbox,... All little gray things.