Media watchdog Reporters Without Borders (RWB/RSF) has urged journalists using iCloud in China to migrate away from Apple's cloud service this month, before control of their data is handed over to a Chinese company (via Hong Kong Free Press).

Beginning February 28, Apple's iCloud services in mainland China will be operated by Guizhou on the Cloud Big Data (GCBD), which is owned by the Guizhou provincial government in southern China. 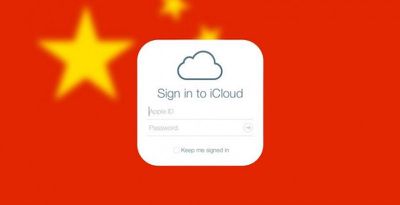 The firm is set to manage Apple's new $1 billion data center, which opened in the region last year. The operational change was agreed between Apple and the Chinese government, bringing the tech giant into compliance with the country's new cloud computing regulations.

Apple says the partnership with GCBD will improve the speed and reliability of iCloud services and products, and has assured iCloud customers that no backdoors had been created into any of its systems. However, press freedom advocates fear that user data will become accessible to the Chinese state as a result of the switch. Earlier this week, RWB/RSF explicitly criticized Apple's "readiness to accommodate China's authoritarian regime".

"Apple promises that it will never give governments a backdoor to content, but there is no way of being sure about this," Head of RSF's East Asia bureau Cédric Alviani said.

"Knowing the Chinese government's determination and the extent of the means of pressure at its disposal, it will end up getting its way sooner or later, if it hasn't already."

Last month, Apple contacted and advised customers in China to examine new terms and conditions, which include a clause that both Apple and the Chinese firm will have access to all data stored on iCloud servers. Customers who did not want to use iCloud operated by GCBD were also given the option to terminate their account before the February 28 switch.

snowboarder
But Tim is the biggest defender of human rights! When it is convenient to Apple...
Score: 30 Votes (Like | Disagree)

iZac
No back doors - front doors only, thanks!
Score: 21 Votes (Like | Disagree)

Mansu944
Apple is all SJW but they’ll grab their ankles if china asks.
Score: 10 Votes (Like | Disagree)

China controls every aspect of the internet within their boarders. They can access anyones devices or any data they choose. If encryption causing a problem, they send a text or a personal visit to say turn it off. First warning, you do not want to get a second warning. A fellow traveler decided to use a VPN to get around their internet rules. In Shanghai, 30 million people, on the 20th hotel floor, and within a couple hours two nicely dressed Chinese Security at his door, first warning. In China, nowhere to hide if one attaches their internet. Sum it up. If they cannot get access to your data by technology they just politely ask, one time.

I had the same experience years ago. I thought I was living in the Dark Ages, then I realized, "Yes, I'm in China now." Countries like that make me very grateful and humbled by that experience, that I don't live in countries where they can, and will, control everything they want. Countries' governments are never perfect, but given the alternative living in conditions like that, I'm truly grateful to be an American.
Score: 8 Votes (Like | Disagree)

I disagree. China was not backing down on this at all and you folks who are criticizing Apple for this decision would then be upset over the loss of China as a market for those of you who are shareholders.

You don’t get to have it both ways. Either they do this or they lose sales.

True. But I don't see Google or Facebook bending over backwards to get business in China. Why is Apple so desperate for China business?
Score: 6 Votes (Like | Disagree)

GrumpyMom
According to the article this firm is owned by the Chinese government. So uh...no backdoors needed, right? It’s the fox being put in charge of the hen house.

I’m actually going to side with @JediZenMaster here and acknowledge that Apple had to do this if they want to stay in business in China. It’s too huge of a market to abandon and they’ve invested too much into China to back away now.

Is it disgusting and hypocritical? Well, yeah. But we in the U.K. and USA know darned well and good our %%*+ is under surveillance, too, whenever and however our govts can pull it off. If not for whistleblowers we never would have had knowledge of it, just suspicions. And if the government doesn’t poke around in our data, the carriers and the services we use do. Our freedom of speech is also manipulated, too. Many people have made charges of biased policies on social media as it pertains to political expression. Ideals are extremely important but hard cold realism and pragmatism are also necessary for survival while we struggle to align reality to our ideals.

My guess is that the executives considered all of this when they made their concessions to China. I’m not a big fan of globalism. In fact I often loathe it. But if you’re going to take a company global, this is the crap you deal with and idealism and values often are sacrificed to the dictates of another culture...hence my distaste for most globalist thought and policy.

The way our markets currently work, the pressure to take businesses bigger and bigger and ultimately global is almost impossible to resist. I’ve seen this take place in the trajectory of my husband’s career, going from a small company that got sold to ever bigger and bigger ones.

China is...a many headed beast. I sometimes wish I could live several hundred years just to see how it turns out with them. At other times, I’m glad I’m halfway through my projected lifespan because I can’t bear to see a government like theirs succeed on all of the lives they trampled. But again, what nation isn’t built over trampled corpses?
Score: 6 Votes (Like | Disagree)
Read All Comments