Over the past few weeks, iOS app developers have been sharing stories on Twitter about their apps getting rejected by Apple's App Review team because emojis were used in "non-keyboard based situations." So if an app displayed an emoji in its user interface, where the user did not type it in with a keyboard, Apple said it was not complying with its trademark and Apple Emoji imagery guidelines.

As accounts of similar situations begin to build, Emojipedia this week reported on the topic, and attempted to make sense of the new rules, with a handful of examples of apps that have been using emoji within their UI and are now being rejected by Apple. In the iOS app "Reaction Match," a Game Center error screen saw the use of the loudly crying face and alien emojis become problems for developer Eddie Lee. He eventually removed all instances of the emojis, and the App Store reviewers then accepted the app. 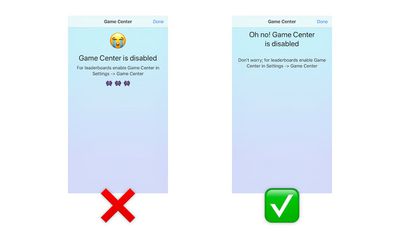 Image of Reaction Match's rejected (left) and approved (right) app screens via Emojipedia
Github client app GitHawk faced similar issues, with Apple rejecting the app for its use of emojis as "media" in various parts of the app. As developer and software engineer Ryan Nystrom explained, these instances of "non text input" emoji use got flagged, but once he removed the emojis and used them only as "content" and as text input examples, the app was approved.

Approved it, shouldn't use emoji as "media" (the Inbox Zero screen), but as "content" its ok pic.twitter.com/JWHwv3ZgNa — Ryan Nystrom (@_ryannystrom) January 23, 2018

Like other newly discovered App Store guidelines, there is some inconsistency in Apple's processes and the exact rules remain unclear. For example, a few major apps apparently violate the new emoji-as-text-only rule -- like Snapchat's emoji friend scores -- but appear to not have had issues in recent updates. Other areas of uncertainty include emojis in push notifications and in responses from chatbot apps.

As Emojipedia pointed out, this could affect smaller developers the most and cause their user interfaces to become less personalized.

Smaller developers will be hardest hit as Apple's professionally designed emojis were a quick and easy way to provide imagery in an app that fit in with the system. They will now need to create their own icons to fill the gap, embed a licensed emoji set, or have a naked-looking UI.

Larger developers have the budget to create their own emoji or icon sets, or to license existing ones. The largest or most popular apps may see Apple overlooking breaches of this new policy.

Apple is known to consistently introduce tweaks and updates to its App Store Review Guidelines, occasionally amending harsher rules that create unexpected problems for some apps. For example, last June Apple introduced new guidelines that banned apps created from a commercialized template or app generation service in an effort to fight clones and spam on the App Store. Eventually, the rule negatively affected small businesses who rely on such templates, and Apple amended its guidelines to be less restrictive.

Outside of the traditional emoji characters, Apple launched a new set of advanced emojis with Animoji on the iPhone X. The new feature creates 3D models of existing emojis and tracks their animations to the user's facial features using the iPhone X's TrueDepth front-facing camera, which resulted in the phenomenon of "Animoji Karaoke" videos that Apple itself eventually got in on.

This is funny because Paul Hegarty in his Stanford iOS 11 development course uses emoji in the first class demo. I suppose Apple thinks it isn't professional to use them outside email and messaging apps, which makes sense.

Since when is using emoji for anything professional?
Score: 16 Votes (Like | Disagree)

The reasoning behind something you perceive as a failure is not always directly related to their work on Animoji.
Score: 10 Votes (Like | Disagree)

Anyone know the reasoning behind Apple blocking this? Do they just not want developers to be lazy?

I figure if it looks good, it should be allowed. Nobody really owns Emojis anyway.

I don't know but seems to me Apple wants to reserve use of emojis as typing shortcut and not extend them to, essentially, clip art. It's not about ownership of emojis, but rather how Apple wants them to be used in the OS to keep it unified.
Score: 8 Votes (Like | Disagree)

GrumpyMom
I guess it’s because Apple expended their own resources to create these emoji and don’t want them treated as generic royalty free clip art as @Chupa Chupa posted. It makes sense from the point of view of preserving their “brand” integrity, though the optics on this does make them look heavy handed. I don’t think it’s that big a deal. The revised screen in the example without the emoji has better impact and seems more personal with the new wording than it did with that ugly emoji on it.
Score: 7 Votes (Like | Disagree)

Zenithal
Yeah, screw the Pro and the Mini. This stuff is as bad as coke!
Score: 6 Votes (Like | Disagree)
Read All Comments