Apple yesterday announced that it sold 77.3 million iPhones during the first fiscal quarter of 2018 (fourth calendar quarter of 2017), and according to data shared by Strategy Analytics, Apple's record sales made the iPhone the top selling smartphone in the world during the quarter.

In Q4 2017, Samsung shipped 74.7 million phones, 2.6 million fewer than Apple's 77.3 million. Other vendors like Huawei and OPPO shipped far fewer devices at 41 million and 29.5 million, respectively. Apple also beat out competitors with the average selling price of its iPhones during the quarter, which came in at $796. 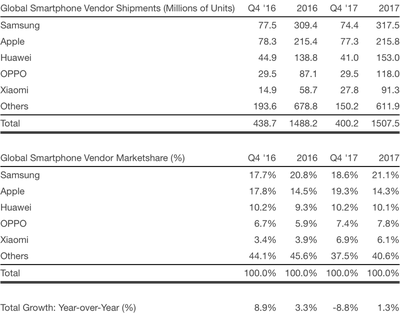 Apple beat out all other smartphone vendors including Samsung, Huawei, OPPO, and Xiaomi, but its overall iPhone shipments were down from 78.3 million in the year-ago quarter. It's worth noting, however, that Q4 2017 was a 13 week quarter, while Q4 2016 was a 14 week quarter.

Over the course of 2017, though, smartphone shipments actually grew 1 percent and topped 1.5 billion units for the first time ever.

Apple does not break down its iPhone sales, but yesterday, Apple CEO Tim Cook said that the iPhone X has been the top selling iPhone every week since it shipped in December. Cook also said that the iPhone X, iPhone 8, and iPhone 8 Plus lineup brought in the highest revenue of any lineup in the company's history.

Reporting that Apple sold a lot of iPhones in the last quarter of 2017 is a bit stupid considering it's when it releases them. Samsung releases in a different quarter.
Score: 12 Votes (Like | Disagree)

Has the Galaxy line really gotten that bad?
Score: 12 Votes (Like | Disagree)

djcerla
Let that sink in for a moment: Apple sold more smartphones than anyone else, at crazy high ASP.

Not to mention wearables: Apple grabbed 75% of the market. ('http://iphone.appleinsider.com/articles/18/02/02/apple-watch-airpods-drive-wearables-rev-70-outpacing-size-growth-of-amazon-ads-google-cloud-alphabet-other-bets')
Score: 10 Votes (Like | Disagree)

Let that sink in for a monent: Apple sold more smartphones than anyone else, at crazy high ASP.

Not to mention wearables: Apple grabbed 75% of the market. ('http://iphone.appleinsider.com/articles/18/02/02/apple-watch-airpods-drive-wearables-rev-70-outpacing-size-growth-of-amazon-ads-google-cloud-alphabet-other-bets')

Not true. Samsung sold more in the whole year. You can't compare a quarter where apple has a new phone out and samsug does not. Same thing applies to the quarter when Samsung has a new phone out, apple hasn't. So the best to look at is the full year for a better comparison.
Score: 8 Votes (Like | Disagree)
Read All Comments

Saturday May 21, 2022 9:00 am PDT by Hartley Charlton
With around four months to go before Apple is expected to unveil the iPhone 14 lineup, the overwhelming majority of rumors related to the new devices so far have focused on the iPhone 14 Pro, rather than the standard iPhone 14 – leading to questions about how different the iPhone 14 will actually be from its predecessor, the iPhone 13. The iPhone 14 Pro and iPhone 14 Pro Max are expected...
Read Full Article • 358 comments