Uber's latest app update appears to have removed several important iOS integrations, with the service now unavailable to both Siri and Apple Maps.

If you ask Siri to get you an Uber, a feature that has been available since the launch of iOS 10, Siri will say that Uber hasn't activated that feature. In the "Siri & Search" section of the Uber options in the Settings app, there's also no longer a "Use with Siri" toggle. 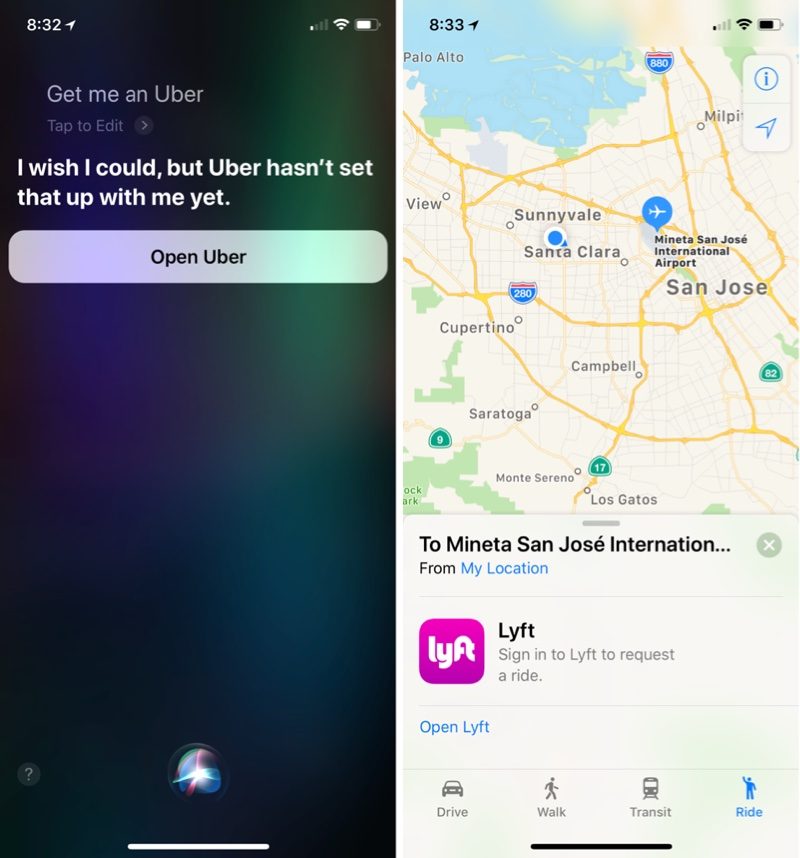 Similarly, in Apple Maps, you can no longer select Uber as an option when choosing "Ride" when getting directions. This is also a feature that debuted in iOS 10.

Both Siri and Apple Maps integrations are still available for other ride sharing apps like Lyft, so the problem seems to be with the Uber app rather than with Apple's services.

The removal of both features was noticed by MacRumors readers and reddit users starting last week. It is not clear if Uber has deliberately removed these features or if it's a bug, and the company did not respond to a request for comment when contacted by MacRumors earlier this afternoon. We have also contacted Apple and will update this post when we hear back.

Uber integration with Siri, enabled through the SiriKit API, was a much touted feature when iOS 10 first launched, as was Apple Maps integration. Both Apple and Uber heavily promoted the two options when iOS 10 rolled out.

There's also the part about Lyft not having been repeatedly caught doing all manner of horrible things.
Rating: 13 Votes

izyreal
Alas, poor Uber! I knew him, Horatio; a fellow of infinite jest, of most excellent fancy; he hath borne me on his back a thousand times; and now, how abhorred in my imagination it is! My gorge rises at it. Here hung those lips that I have kissed I know not how oft. Where be your gibes now? Your gambols? Your songs? Your flashes of merriment, that were wont to set the table on a roar?
Rating: 12 Votes

Blackstick
I switched to Lyft and haven’t looked back. Better cars and drivers, same prices, better treatment of women at the company.
Rating: 10 Votes

chelsel
If you haven't tried Lyft... do it. In my experience it's cheaper and the cars are cleaner.
Rating: 9 Votes


I would love to, but in Australia we haven’t got any other alternatives to Uber :/
Rating: 3 Votes

robjulo
While I use Lyft almost exclusively, a vast majority of the drivers I’ve ridden with drive for both services, so same cars and same drivers.

I switched to Lyft and haven’t looked back. Better cars and drivers, same prices, better treatment of women at the company.

What exactly does the Uber app offer that Lyft doesn’t?

It takes Apple Pay. They were one of the first apps to take it when it was introduced.


In Uber you can send a ride for someone else, you can add multiple stop points, there are more drivers, the app looks better and you can use Apple Pay. I was unable to use Apple Pay last year in the Lyft app when I downloaded to try it out. I had to add a credit card before I called for a ride, that took forever because they don’t have as many cars as Uber.
Rating: 2 Votes

This is too bad. I enjoy using Uber, but I don't trust their app. I would use Apple Maps to hail a car every time, even with location data turned off on the Uber app. But I guess Im in the minority here, and thats why they removed it.


Or Apple’s privacy policy let them see or do less with data from people who triggered it from Maps, and Uber wanted to do something dodgy with end user data.

By doing this they force people to their app.

I know that sounds like a conspiracy theory, but is it really after the 95 other bad, disrespectful or illegal things Uber been caught doing already with user data ?
Rating: 2 Votes

friednoodles
This same issue is happening with LINE, and it looks like it might be a bug, because under the settings summary it shows “Use with Siri” (indicating it’s already enabled), but when you tap through to where the toggle should be, the toggle/option is completely missing. So there’s no way to turn it off, and Siri gives the same “hasn’t set that up with me yet” message. This has been happening for me since iOS 11.0.
Rating: 1 Votes
[ Read All Comments ]