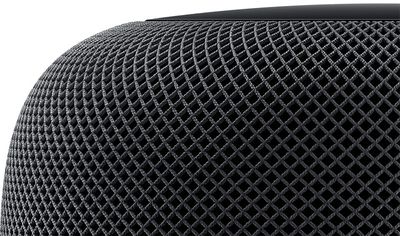 The four 15-second clips show the word HomePod animated in various ways, with the actual speaker only appearing in brief flashes. Apple also highlights that the speaker is now available to order ahead of its February 9th launch across the United States, United Kingdom, and Australia.

The music-focused ads are each set to their own song, including Ain't I by Lizzo, DNA by Kendrick Lamar, Holy Water by Hembree, and All Night by Big Boi. Apple continues to position the HomePod as a "breakthrough speaker" first and "intelligent home assistant" second in the description of each video.

The ads follow Apple's teaser video titled Introducing HomePod shared back in June, after the speaker was previewed at WWDC 2017. It's very possible they'll air at commercial breaks during the 60th Annual Grammy Awards on Sunday.

Apple has primarily positioned the HomePod as a speaker that can stream Apple Music, but with built-in Siri, users can also send messages, set timers, play podcasts, check the news, control HomeKit-enabled smart home accessories, and complete several other tasks without needing to take out their iPhone.

The speaker is equipped with spatial awareness and Apple-engineered audio technology, including a seven‑tweeter array and high-excursion woofer. It stands nearly seven inches tall and is powered by Apple's A8 chip.

Dilster3k
This really has to be one of their weirdest launches ever. Your average Joe doesn't even know this exists, tech experts aren't fully aware what it's fully capable of... And man these ads don't help that.
Score: 48 Votes (Like | Disagree)

and if they were sold out we’d hear:

‘I thought Tim Cook was a supply chain guru?! Worst product release ever!!!’

You guys have an answer for everything lol!
Score: 25 Votes (Like | Disagree)

ipedro
These ads just emphasize the poor choice of name. Should have been POD.

The iPod is dead and it would've been nice to see the name persist. HomePod doesn't go well together and Home itself is far too specific for a device that'll be used in offices, retail, etc.

POD would have fit with Apple's newest products: MUSIC, TV, WATCH. HomePod seems like an outlier.
Score: 22 Votes (Like | Disagree)

plucky duck
What in the hell, these ads are hideous, very unconventional, looks very low budget.
Score: 22 Votes (Like | Disagree)

This really has to be one of their weirdest launches ever. Your average Joe doesn't even know this exists, tech experts aren't fully aware what it's fully capable of... And man these ads don't help that.

Good thing this Joe works at MacRumors and knows it exists :D
Score: 20 Votes (Like | Disagree)

gugy
These are cool! Love the type animation treatment.
Score: 18 Votes (Like | Disagree)
Read All Comments

Sunday January 16, 2022 8:56 am PST by Sami Fathi
Continuing the tradition set with the iPhone 13 Pro, only the highest-end iPhone 14 models will feature Apple's ProMotion display technology, according to a respected display analyst. Ross Young, who on multiple occasions has detailed accurate information about Apple's future products, said in a tweet that ProMotion will not be expanded to the entire iPhone 14 lineup and will remain...
Read Full Article • 66 comments