Apple this morning officially released the iOS 11.2.5 update to the public, introducing support for the upcoming HomePod smart speaker, which is set to be released on February 9.

In addition to adding support for HomePod, the update also introduces several HomePod-related features such as Siri podcast-based audio news reports and a new music interface, along with bug fixes and security improvements. Check the video and post below for everything that's new in iOS 11.2.5.

When you ask Siri about the news of the day via Hey Siri or another hands-free method, the new feature allows the personal assistant to provide Podcast news from sources like NPR, Fox News, CNN, or The Washington Post.

While asking Siri about the news of the day will provide generic news updates from the aforementioned sources, you can also ask for more specific news about topics like sports, business, and music. Sports news provides podcasts from ESPN or NBC, business news offers podcasts from Bloomberg or CNBC, while music news offers Apple Music Beats 1 content. 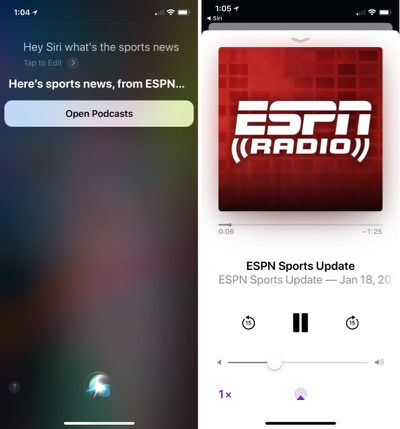 Siri podcast news is available in the United States, Australia, and the UK, the three countries where the HomePod is launching in February. Siri news can be accessed on devices in other countries according to Apple's release notes for the iOS 11.2.5 update, but content will only be provided in English and the feature appears to be incomplete in unsupported countries.

The only significant outward-facing change introduced in iOS 11.2.5 brings a new layout for audio controls. When accessing the music widget on an iPhone or iPad, when you 3D Touch or press on the icon in the upper right hand side, all available audio playback sources are now listed as separate tiles.

Tapping on one of the audio sources, such as an Apple TV, allows audio to be played on the device and controlled separately from the iPhone. Using this feature, you can listen to music on one device, like the Apple TV, without interfering with audio playing on the iPhone.

Other, smaller improvements and bug fixes were also included in iOS 11.2.5, addressing issues in Mail, Messages, and CarPlay. From Apple's official release notes:

The iOS 11.2.5 update can be downloaded for free on all eligible devices over-the-air using the Settings app. To access the update, go to Settings --> General --> Software update.

Can't be true! Every iPhone 6s is unusable and slow because every phone was impacted and has a defective battery.

GTO
..... and it doesn’t include that throttling switch which i’ve been waiting for.
Score: 11 Votes (Like | Disagree)

MrGuder
The control panel is still way too busy looking. I still prefer my iOS 9.3.5 control panel. No, still not updating.
Score: 4 Votes (Like | Disagree)

err404
That sounds really interesting. I hope this makes Airplay functionally closer to to how Chromecast works. Meaning that casting content doesn’t completely take over your phone.
When I get home I want to try casting a video to the TV and watching a different video on my phone.
Score: 4 Votes (Like | Disagree)

Weird...I have and even connected to my 4k ATV, and I don't see anything like this. The tiles and options to change output just don't show up for me. Tried playing audio from a few different apps on the phone and output to the ATV. It all works fine, I just don't get the extra options referenced in the article here.

Same thing for me. I have an Apple TV 4K and an Airport express hooked up to my stereo. No tiles. Just the same old (awkward) interface in the control center.
Score: 3 Votes (Like | Disagree)
Read All Comments