Apple today released watchOS 4.2.2, a minor update to the watchOS operating system that runs on the Apple Watch. watchOS 4.2.2 comes over a month after the release of watchOS 4.2, an update that introduced Apple Pay Cash.

watchOS 4.2.2 can be downloaded through the dedicated Apple Watch app on the iPhone by going to General --> Software Update. To install the new software, the Apple Watch needs to have at least 50 percent battery, it needs to be placed on a charger, and it needs to be in range of the iPhone. 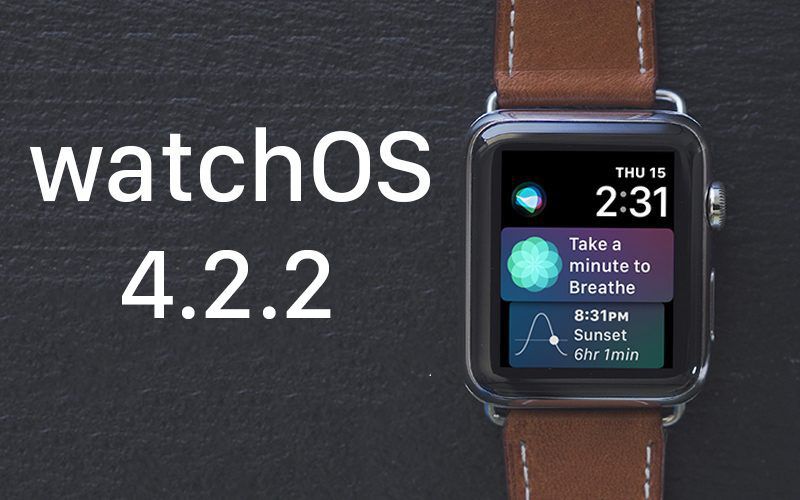 During the beta testing period, no major outward-facing changes were discovered in watchOS 4.2.2. According to Apple's release notes, the update "includes improvements and bug fixes." No other details are available.

Let me know if it's good and it doesnt make my watch hang for 10 seconds trying to use the dock or start a workout!


This update made my series 3 super fast. It’s so responsive now.

Any one else notice the huge speed increase?
Rating: 3 Votes

Luckily i’m on it, but i was thinking of updating....

Currently I'm downloading this latest update. I've already checked for an update via my Jabra PC app over USB ... no update there.

PS: I still have this pause in music playback when using my Beats Studio3's.


Let me know if it's good and it doesnt make my watch hang for 10 seconds trying to use the dock or start a workout!
Rating: 3 Votes

Shame you read all these replies and didn’t spend two minutes to read the article.
Rating: 2 Votes

Cool. let me know how it works out.

Left my gates, iPhone 7 + Nike+ & Jabra connected over Bluetooth, iPhone music source during commute to the gym.
Note: issues connecting to Jabra to phone for 5mins (screenshots note the time within the same minute), powered off Jabra then back on resolved.
Arrived at the gym, stop music playback on iPhone closed the Music app and a surprise, Jabra sounded off automatically “Bluetooth Connected”. Glanced at Nike+ Didn’t notice anything yet in Watch settings a Jabra was connected. Nothing abnormal.
Launched Strong app, music app on Nike+ launched local saved playlist ... issues connecting to Jabra, resolved after 2 attempts to connect via pop-up dialog from Watch Music app and successful.

No Lag during workout in strong app or Music app; jumping tracks forward and back, changing local saved playlist, switching between Strong & Music Watch app while phone was in locker!

As far as I’m concerned Apple fixed all lags. The issue I have now is the Jabra headset firmware. Still under warranty support to be contacted. Well, I'm downloading the update in hopes that my Series 3 becomes fast again. If not, I'm selling this thing and getting the series 4 the minute I hear rumors of a release date. Sounds like the series 2 is a waste for most, abandon wear with no hope in sight.


Anakin... You're breaking my heart.

pdaholic
My watch is still having intermittent problems transferring music from my phone. With each update I hope that it “just works” like Apple products once did, but no. Reset watch. Reset phone. Open phone watch app, restart phone watch app. Maybe at some point it will start transferring. Sometimes it never transfers. Ugh.
Rating: 2 Votes

In Apple Watch S4 Apple needs to create a brand new ASICS chipset that allows for Bluetooth 5, faster 802.11 AC (if not already in S3) and faster installation for WatchOS. Right now it seems that the iPhone downloads the package and then feeds it over Bluetooth to the Watch then installation begins. Why not use the iPhone as a conduit for management ... have the Watch download and install it - if storage allows for it. I still have 4GB free space on my (second owned) Nike+ S2.

Oooo your S3 is only now "beginning to slow down"?

Try those of us that have the Nike+ S2 that after WatchOS 3.2.3 deployed on July 19TH began to discover hiccups in Blueooth Headset connectivity reliability. Then even worse, with WatchOS 4 deployed on September 19TH 2017 (Less than 30 days before WatchOS 4.0.1 for S3) that performance CRAWLED to a baby's pace!!

Whenever I'm at the gym (not always is the gym's WiFi working, staff screwing around) I have 1 of my playlists playing during my weight training workout, Jabra Sport Pulse ('https://www.jabra.ca/sports-headphones/jabra-sport-pulse-wireless') is what I'm listening to my playlist on as well as it's heart rate monitor, and the Strong work out application. All are up to date.

I don't know if this is related to the iPhone 7 I have because it has it's own annoyance since I bought it summer 2017.
iPhone 7 + Jabra Sport Pulse / + Nike+ S2 : Both on silent (or just the iPhone on days I leave the watch at home) ... while listening to music there is a half second pause here and there ... seemingly randomly.
No iMessage/SMS/MMS
No Email (sometimes)
No Instagram alert/message/update on feed
I don't have a FB account not signed in from before I killed it.
I don't use SnapChat
BBM is pretty much bunk - 1 contact left and she's off completely; guess I should kill this.
So why is there seemingly an alert that is interrupting my music if it's not the headphones built in audio (I don't use the fitness coach app imbedded in the headset), Watch and iPhone are in Silent and the VIPs are not messaging or calling me so this is a COMPLETE Annnoying Mystery to me. Arrrgh.

chinito77
My Apple Watch Series 3 was an amazing device for about 3 months until it began to slow down. I haven't even installed new apps since the first week so I can't understanding why the performance degrade? It's unresponsive at times, Siri takes longer to launch, and sometimes Homekit fails to turn off all the lights. Are these updates to blame?
Rating: 1 Votes

And some other times it will not COMPLETE the transfer, leaving inconsistent results across iOS reports (not enough storage) and watch reports (still have space). Right now I still have no idea how to properly start a transfer.

Ha, wow, I've not seen that happen yet, but I admit I don't look at the amount of space left as I have only been able to sync maybe 15 songs on the watch, and expect there to be sufficient space left.

I even thought I would stop updating the phone and watch once I had a stable syncing version, but that doesn't help either, they just eventually stop syncing.

Yesterday I had tried to sync about 10 songs before my 10 mile run, wasted 45 minutes trying to trouble shoot, and ended up running with my phone in my hand because they simply wouldn't transfer. Totally defeats the purpose of having the watch (for me).

Guess I should erase/repair my watch AGAIN to make it work? BS! Such a long process. Even restarting my watch takes a long time (series 2). Thankfully my iPhone X reboots in seconds now, which takes a little of the pain out of it.