Ahead of the promised "early 2018" launch of the HomePod, Apple has received official FCC approval for the smart speaker. Now that FCC approval has been obtained, Apple is free to begin selling the device at any time.

All devices that use communications technologies like Bluetooth and Wi-Fi must be submitted to the United States Federal Communications Commission to ensure compliance with federal regulations before they're eligible to be sold in the United States. That FCC approval has been obtained suggests the HomePod will launch in the near future. 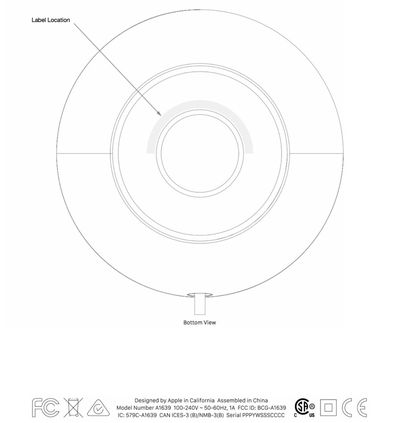 For comparison's sake, Apple received FCC approval for the iPhone X on October 4, just under one month before the device was released to the public on November 3.

Today's FCC clearance of the HomePod follows a rumor earlier this week suggesting HomePod supplier Inventec has already started shipping HomePod units to Apple. Apple is reportedly set to receive "about 1 million" HomePod devices and an industry source that spoke to the Taipei Times, the source of the rumor, has said that the HomePod is coming "soon."

Apple originally planned to release the HomePod in December, but the company ended up requiring additional development time, delaying its debut until 2018. Apple has said the HomePod will ship out to customers in the US, UK, and Australia in "early 2018."

Early 2018, by Apple's historical definition, is something of a broad window. Apple considers "early 2018" to be the period between January and April, so it's been tough to narrow down the prospective launch date of the HomePod. Given the shipment rumors and the FCC approval, however, we may see the device in late January or early February rather than later in the year.

Like many new Apple products, rumors suggest initial supplies of the HomePod could be constrained at launch. Inventec is expecting revenue from the HomePod to be "limited" during Q1 2018 due to a low quantity of HomePod devices available for shipment.

Fozziebear71
I have money ready.
Score: 20 Votes (Like | Disagree)

zzzzzzz. Who cares? They're so late to market there's no hope of overtaking Amazon or Google. Especially at that price point. Yeah, a few people will buy them, but like someone above said, it's too little too late.

rafark
They needed time to get the throttling software ready. :)
Score: 16 Votes (Like | Disagree)

I'm excited for the HomePod, but it's going to be a whipping boy for years to come. It'll sell about the same as the Apple TV and be considered a failure.

Others will chastise the HomePod and consider it a failure on a tech forum (Which is likely those negatively commenting who will never own one or have experience with it), but overall, I think the HomePod is going to Be for those really do want more than just a smart speaker, the want room filling audio, which would you expect a product from Apple at this price range. I think it will do well, even given the delay.
Score: 11 Votes (Like | Disagree)

Chances of this reaching Norway?

It would have to be REALLY loud.
Score: 9 Votes (Like | Disagree)

FightTheFuture
I'm excited for the HomePod, but it's going to be a whipping boy for years to come. It'll sell about the same as the Apple TV and be considered a failure.
Score: 9 Votes (Like | Disagree)
Read All Comments