Today marks the tenth anniversary of the late Steve Jobs unveiling the MacBook Air, the world's thinnest notebook at the time. 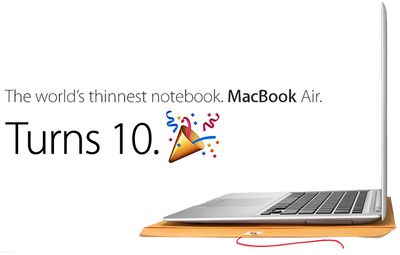 After introducing the AirPort Time Capsule and sharing some iPhone and Apple TV news, Jobs walked over to his podium, grabbed a manilla envelope, and pulled out the sleek MacBook Air. The crowd at Macworld erupted with applause as Jobs held the ultra-light notebook in the palm of his hand.


MacBook Air was all about firsts. The notebook was Apple's first without a CD/DVD drive, first to ditch a range of ports and connectivity options, first with a multi-touch trackpad, first to have the option for SSD storage, first to weigh just three pounds or less, and first with a mercury-free display.

A single design decision also epitomized the past decade of Apple: a flip-down door on the right side of the machine provided access to only a single USB port, a headphone jack, and a micro-DVI port.

We've seen Apple go down this path many times since: it introduced the MacBook with just a single USB-C port, reduced the MacBook Pro's connectivity to Thunderbolt 3 ports, and removed the headphone jack on the iPhone 7. Each change generated controversy, but ultimately set the course for its future.

Stephen Hackett of 512 Pixels has shared a great piece titled The MacBook Air: A Decade's Worth of Legacy over at MacStories that dives into the notebook's history. He also put together the video below.


A decade later, the MacBook Air remains a product in Apple's lineup, but likely only because it is a lower-cost option. Beyond a minor speed bump last June, the notebook hasn't been updated since March 2015, and it very well may be discontinued once Apple feels able to sell its 12-inch MacBook for around $999.
Related Roundup: MacBook Air
Tag: Steve Jobs
Buyer's Guide: MacBook Air (Neutral)
Related Forum: MacBook Air
[ 264 comments ]

Naimfan
"The thinness came at a cost."

djlythium
This was a game-changer. Never before had the tech world had so much power and utility in such a thin device. Netbooks were an attempt at this, but ultimately failed because they were singe-use devices. The Air set the stage for developments that would forge laptops beyond.
Score: 28 Votes (Like | Disagree)

ImperialForces
Stop reminding me how old I am!
Score: 25 Votes (Like | Disagree)

Apple should really refresh the Air.

Well since this year will be the 10th anniversary they'll be introducing an Air X.