The new macOS High Sierra 10.13.3 beta can be downloaded from the Apple Developer Center or through the Software Update mechanism in the Mac App Store with the proper profile installed. 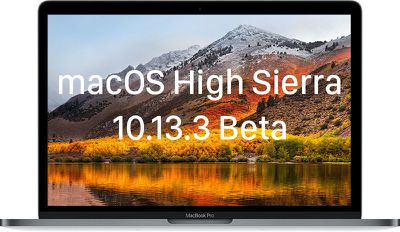 I hope it fixes the bugs especially about the Finder and Spotlight etc. in HS. Otherwise all this big talk of it being like a SL release will be a plain ******** from Craig Federighi.

I imagine that was the goal, but the challenge of a fixed release schedule (aligned with the new iPhone models) was too great to overcome this year. I can picture them planning out the release schedule and having just enough time to meet their quality goals, and then being hit with unexpected bugs (including "drop everything and fix" security vulnerabilities) compressed their schedule so much that they were forced to de-prioritize more bugs than normal.

Aside from the latest major security vulnerabilities that may require continued tinkering to the existing patches and / or firmware updates, still needs to work out the remaining kinks in APFS (Fusion drives, anyone?), external GPU and VR support is supposed to be end-user "ready" in Q2, iMessage in iCloud was promised last year, and there's probably much more I'm forgetting.

Apple had to recently support the iMac Pro, and if there are any planned Mac hardware refreshes in the Spring, the software engineering group is likely already working to make sure those new products are properly supported. All these efforts reduce the resources available to focus on polish and the remaining quality-of-life bugs and issues in HS.

For all those reasons, I am continuing to hold off on upgrading to High Sierra. My ideal situation would be to upgrade once there are a couple of point releases that are extremely boring in nature, i.e. no new features or major changes. That would indicate to me that a lot of 'behind-the-scenes' bugs are finally being squashed.
Score: 4 Votes (Like | Disagree)

westislander
Just curious why these MacOS beta update reports are no longer being posted on the front page but instead been relegated to Mac blog section
Score: 4 Votes (Like | Disagree)

If Microsoft can move to twice-yearly OS updates, why can't Apple sustain yearly releases? If Apple is struggling to maintain software quality, then perhaps they simply need to push features which aren't ready into a subsequent release.

Because Microsoft has smartly moved their releases to actually not be "monolithic" releases. The Creators Update and Fall Creators update were effectively similar to macOS old "major-minor" point revisions, from like 10.5 to 10.6, rather than the MAJOR point revisions macOS is suffering under now. Microsoft did a significant amount of under-the-covers engineering going into Windows 10; Apple has (obviously) been breaking a lot of stuff down below the app layer for the last few years. Which goes to my point: Apple needs to lock down 10.13, make that the "base"; get the graphics stuff working, the USB working, SOLID. Then LTS that, and iterate above it. Windows 10 is now on 2 years in on roughly a LTS foundation, and getting better as it goes. macOS on the other hand has been struggling for 3 1/2 years (since around 10.10, I'd say; 10.9.0/.1 weren't great, but by .3/.5/.6 they cleaned it up). 10.12.3 was relatively solid, but 10.12 wasn't. And by the time users found partial "stability" in 10.12.5, Apple was already right back to breaking things in 10.13. Worse, they didn't fix a lot of things 10.12 had broken (PDFKit, IOKit).

I don't think this is a "features" problem, I think it is a "marriage" problem. By forcing the development cycle to marry both the Operating System and the Userland (the Apps and Services on top of that OS), Apple is finding that both are suffering, badly. There should be no reason that a well-engineered LTS OS can't support iterative new "features". Certainly Windows 10 and Linux prove there IS a better way!

(And perhaps I've gone and said it: "well-engineered". Being an engineer, seeing what I see, it is my personal belief that "Design" has taken FAR too large a role at Apple. It is an ages-old discussion, almost a "philosophical discussion", about the roles of Design, Engineering, and Architecture in software/OS development. Apple pretty clearly has banked a PR/marketing reputation on "Design", with a capital-D. Unfortunately, arrogant Designers tend to be terrible Engineers, and worse Architects. I'd be surprised if the Apple Exec Team even knows the technical difference between the three at this point. To an engineer, I'm seeing too little good engineering at Apple, the QA issues reflect Apple placing a low priority on understanding failure before it occurs. Prior to Jobs returning, Apple was known for all three, not JUST design. Today, you don't hear much about Engineering or Architecture. ALL DESIGN ALL THE TIME. And the lack of any LTS strategy, the lack of "automatic" updates to products like the Mac mini and the stumbles with the MacBook Pro, show me that Design has totally eclipsed Architecture too. A well-architected platform shouldn't be seeing 3-year "holes" and malfunctioning IO/GPUs like we are seeing, and it would not have seen so many technologies stagnant/"withering on the vine". One key example: when Apple removed the 3.5mm headphone jack, if Lightning had been "architected" they would have been ready to replace the 3.5mm headphone jack on the Mac. Think of that: the MacBook now with 2 capable ports; headphones and peripherals cross-platform compatible. Instead, the iMac Pro ships with a 3.5mm headphone jack that an iPhone X buyer can't use, and MacBook Pro users can't even plug their iPhone X in with the cable in the box. No conceivable way that was "architected" purposefully. At least, if it were, I've never had the misfortune of having worked with an Architect so daft in my lifetime.)
Score: 4 Votes (Like | Disagree)

Gonna clean install off this when it comes out, haven’t installed HS yet so hopefully it’ll be great from day 1 with this update

Spare your time, there's really few if any reasons to clean install macOS.

I am on OS X/macOS since the very first 10.0beta, I have never reinstalled, always just updated to the latest, had a few bugs here and there but they got fixed by Apple or I did myself.
Score: 3 Votes (Like | Disagree)

To be honest, these bugs have existed since Yosemite.

There were bugs I'd had filed against 10.7 that didn't get fixed until Sierra. Not one or two, dozens. Worse, some of the tickets are still open, Apple obviously doesn't even bother to test against Radar. And that only covers what they have FIXED; another several dozen they still haven't. I started beating the drum several years ago, during 10.7 and 10.8 that OS X QA was suffering under the 12-month dev cycle. Many of the "pundits" (Gruber, Dan Benjamin, Marco) ignored me, called me a "jackal" or "chicken little". Clearly, however, I was right. It has been all this time for anyone to see, if they just took off the rose-colored glasses and looked. The 12-month cycle is unsustainable, was unsustainable, and is now clearly impacting iOS (which itself had significantly impacted Mac OS X's timeline).

Personally, I think the solution is two-fold: Apple should 1) divorce the apps–ALL THE APPS–from OS releases (forces them to eat their own dogfood), and 2) move to a bifurcated OS release: a 24- or 36- month Long-Term Support base with 12- or 18- month + 6-month beta "feature" releases. Doing that, 10.9.5 should have been the LTS release, not 10.10 or 10.11 once 10.12 shipped. There is about zero reason that Apple pushed users off 10.9.5 considering the profligate bug issues with basic productivity apps and frameworks in 10.10 and 10.11 that still haven't even been completely resolved yet (PDFKit, USB bus issues, video artifacting, etc). On the iOS side, users are lurching back and forth between working and not-working releases, dealing for MONTHS with HomeKit and iCloud Photo Library problems (and more: Exchange, baseband reboots, battery, performance, etc).

It is just unacceptable… and was 100% avoidable if the Apple Exec team had just been paying better attention. We used to smugly laugh at Microsoft for this kind of garbage. Who should be laughing now?
Score: 2 Votes (Like | Disagree)

Steve's Dead
Gonna clean install off this when it comes out, haven’t installed HS yet so hopefully it’ll be great from day 1 with this update
Score: 2 Votes (Like | Disagree)
Read All Comments